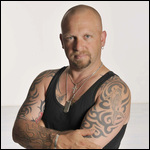 Marco Pfeuti (born 1968 in Oppligen near Thun), better known by his stage name of Gölä, is a popular Swiss rock musician performing mainly in Bernese German.

Gölä eponymous band's first album, Uf u dervo (1998; English: Up and Away) sold 250,000 copies, acquiring quintuple platinum status as one of Switzerland's most successful Swiss German music CD ever. Up until their disbandment in 2002, Gölä and his band produced four more albums with great success, selling over half a million CDs and playing to sold out concert halls.[1]

A 2004 relaunch of the band as Burn with English language songs was less successful.

This article uses material from the article Gölä from the free encyclopedia Wikipedia and it is licensed under the GNU Free Documentation License.

Ce soir Michael von der Heide & Daniela Simmons
Update Required To play the media you will need to either update your browser to a recent version or update your Flash plugin.