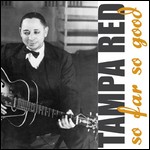 Tampa Red is best known as an accomplished and influential blues guitarist who had a distinctive single-string slide style. His songwriting and his silky, polished bottleneck technique influenced other leading Chicago blues guitarists, such as Big Bill Broonzy, Robert Nighthawk and Muddy Waters, and many others, including Elmore James and Mose Allison.[2] In a career spanning over 30 years he also recorded pop, R&B and hokum songs. His best-known recordings include "Anna Lou Blues", "Black Angel Blues", "Crying Won't Help You", "It Hurts Me Too", and "Love Her with a Feeling".[3]

Tampa Red was born Hudson Woodbridge in Smithville, Georgia. His parents died when he was a child, and he moved to Tampa, Florida, where he was raised by his aunt and grandmother and adopted their surname, Whittaker.[4] He emulated his older brother, Eddie, who played the guitar, and he was especially inspired by an old street musician called Piccolo Pete, who first taught him to play blues licks on the guitar.[2]

In the 1920s, having already perfected his slide technique, he moved to Chicago, Illinois, and began his career as a musician, adopting the name "Tampa Red", with reference to his childhood home and his light-colored skin.[4] His big break came when he was hired to accompany Ma Rainey. He began recording in 1928, with "It's Tight Like That", in a bawdy and humorous style that became known as hokum.[4] His early recordings were mostly collaborations with Thomas A. Dorsey, known as Georgia Tom.[4] The two recorded almost 90 sides, sometimes as the Hokum Boys or, with Frankie Jaxon, as Tampa Red's Hokum Jug Band.

In 1928, Tampa Red became the first black musician to play a National steel-bodied resonator guitar, the loudest and showiest guitar available before amplification, acquiring one in the first year in which they were available. This allowed him to develop his trademark bottleneck style, playing single-string runs, not block chords, which was a precursor of later blues and rock guitar soloing.[5] The National guitar he used was a gold-plated tricone, which was found in Illinois in the 1990s by Randy Clemens, a music shop owner and guitarist, and later sold to the Experience Music Project in Seattle.[6] Tampa Red was known as "The Man with the Gold Guitar", and into the 1930s he was billed as "The Guitar Wizard".

His partnership with Dorsey ended in 1932, but he remained much in demand as a session musician, working with John Lee "Sonny Boy" Williamson, Memphis Minnie, Big Maceo, and many others.[4] He signed with Victor Records in 1934 and remained on their artist roster until 1953. He formed the Chicago Five, a group of session musicians who created what became known as the Bluebird sound, a precursor of the small-group style of later jump blues and rock-and-roll bands.[4] He was a friend and associate of Big Bill Broonzy's and Big Maceo Merriweather's. He achieved commercial success and some prosperity. His home became a centre for the blues community, providing rehearsal space, bookings, and lodgings for musicians who arrived in Chicago from the Mississippi Delta as the commercial potential of blues music grew and agricultural employment in the South diminished.

By the 1940s he was playing an electric guitar. In 1942 "Let Me Play with Your Poodle" was a number 4 hit on Billboard's new "Harlem Hit Parade", a forerunner of the R&B chart. His 1949 recording "When Things Go Wrong with You (It Hurts Me Too)", another R&B hit, was covered by Elmore James.

He was "rediscovered" in the blues revival of the late 1950s, like many other surviving early-recorded blues artists, such as Son House and Skip James. He made his last recordings in 1960.

Tampa Red was one of the most prolific blues recording artists of his era. It has been estimated that he recorded 335 songs on 78-rpm records,[9] of which 251 were recorded between 1928 and 1942, making him the blues artist with the most recordings during that period.[10] Most of his singles were released before Billboard magazine began tracking blues (and other "race music") in October 1942, and accurate sales records are not available. However, he had four singles that placed in the R&B top ten between 1942 and 1951.[11]

Tampa Red recorded alternate versions (usually designated "No. 2", "No. 3", etc.) of some of his early songs. Songs with alternate versions are marked with a superscript plus sign. He recorded some singles with collaborators, credited as the Hokum Boys, Tampa Red's Hokum Jug Band, Papa Too Sweet, and other names.

Although he was a prolific singles artist, Tampa Red recorded only two albums, which were released late in his career. Various compilation albums have been released since his death by different record companies, often with significant overlap, but some compilations focus on certain aspects of his style or original record labels.

This article uses material from the article Tampa Red from the free encyclopedia Wikipedia and it is licensed under the GNU Free Documentation License.

New York Paloma Faith
Update Required To play the media you will need to either update your browser to a recent version or update your Flash plugin.