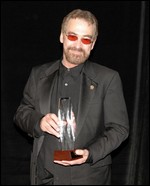 Donnie Fritts (born November 8, 1942, Florence, Alabama) is an American session musician and songwriter. A recording artist in his own right, he has been Kris Kristofferson's keyboardist for over forty years as of 2013. In 2008, he was inducted into the Alabama Music Hall of Fame.

He began playing drums in local bands such as the Satellites and Hollis Dixon at age 15, and later developed into a session keyboard player.

In 1965, Fritts signed with a Nashville publishing company. Songs which he wrote were recorded by Charlie Rich and Jerry Lee Lewis. He later met Kris Kristofferson who was just beginning a career in songwriting. When forming his band, Kristofferson called on Fritts, who continued as his keyboard player for over two decades, performing live, on recordings and in numerous movies.[1]

Through his association with Kristofferson, Fritts appeared in three of Sam Peckinpah's movies: "Pat Garrett & Billy the Kid", "Bring Me the Head of Alfredo Garcia", and "Convoy" as well as other movies including "A Star Is Born" and "Songwriter".[2]

In 1974 Kristofferson and producer Jerry Wexler co-produced Prone To Lean at Muscle Shoals Sound. Everybody's Got A Song was released in 1998. The album included guest appearances by Willie Nelson, Kris Kristofferson, Dan Penn, Spooner Oldham, Waylon Jennings, Delbert McClinton, Tony Joe White, Leroy Parnell & John Prine. It would be another ten years before Fritts released his third album One Foot in the Groove in 2008 produced by Dan Penn with Ron Laury, recorded at Dandy Studio in Nashville.

Chart songs as a songwriter

This article uses material from the article Donnie Fritts from the free encyclopedia Wikipedia and it is licensed under the GNU Free Documentation License.

I Just Want To Be Your Everything Andy Gibb
Update Required To play the media you will need to either update your browser to a recent version or update your Flash plugin.