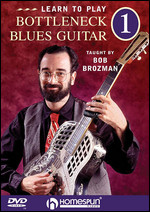 Brozman was born to a Jewish family living on Long Island, New York. He began playing the guitar when he was 6.[1]

He performed in a number of styles such as gypsy jazz, calypso, blues, ragtime, Hawaiian music, and Caribbean music. Brozman also collaborated with musicians from diverse cultural backgrounds such as India, Africa, Japan, Papua New Guinea and Réunion. He has been called "an instrumental wizard" and "a walking archive of 20th Century American music." Brozman maintained a steady schedule throughout the year, touring constantly throughout North America, Europe, Australia, Asia, and Africa. He recorded numerous albums and has won the Guitar Player Readers' Poll three times in the best blues, best world and best slide guitarist categories. In 1999, Brozman and Woody Mann founded International Guitar Seminars, which hosts over 120 students annually at sites in California, New York, and Canada. From 2000 to 2005 his collaborations landed in the European Top 10 for World Music five times.

He was formerly an Adjunct Professor at the Department of Contemporary Music Studies at Macquarie University, Sydney, Australia.

Brozman took his own life on April 23, 2013.[2] After his death, allegations emerged that he had been accused of sexual abuse of minors, including the daughter of one of his managers.[3]

This article uses material from the article Bob Brozman from the free encyclopedia Wikipedia and it is licensed under the GNU Free Documentation License.

I Made Up My Mind Alina Amuri
Update Required To play the media you will need to either update your browser to a recent version or update your Flash plugin.