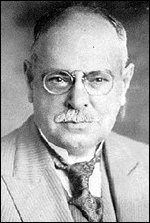 John Philip Sousa ( /sus/; (November 6, 1854  March 6, 1932) was an American composer and conductor of the late Romantic era, known primarily for American military and patriotic marches. Because of his mastery of march composition, he is known as "The March King" or the "American March King" due to his British counterpart Kenneth J. Alford also being known as "The March King". Among his best-known marches are "The Liberty Bell", "The Thunderer", "The Washington Post", "Semper Fidelis" (Official March of the United States Marine Corps), and "The Stars and Stripes Forever" (National March of the United States of America).

Sousa's father was Portuguese, and his mother of Bavarian ancestry. Sousa began his career playing violin and studying music theory and composition under John Esputa and George Felix Benkert. His father enlisted him in the United States Marine Band as an apprentice in 1868. After departing the band in 1875, Sousa learned to conduct. From 1880 until his death, he focused exclusively on conducting and the writing of marches. He eventually rejoined the Marine Band and served there for 12 years as director. On leaving the Marine Band, Sousa organized his own band. He toured Europe and Australia and developed the sousaphone, a large brass instrument similar to the tuba. On the outbreak of World War I, Sousa was commissioned as a Lieutenant Commander and led the Naval Reserve Band in Illinois. Following his tenure, he returned to conduct the Sousa Band until his death in 1932.

John Philip Sousa was born in Washington, D.C., on November 6, 1854, to John Antonio Sousa, who was of Portuguese ancestry, and Maria Elisabeth Trinkhaus, who was of Bavarian ancestry.[1] Sousa started his music education by playing the violin as a pupil of John Esputa and George Felix Benkert for harmony and musical composition at the age of six. He was found to have absolute pitch. During his childhood, Sousa studied voice, violin, piano, flute, cornet, baritone horn, trombone and alto horn.[2] At the age of 13, his father, a trombonist in the Marine Band, enlisted Sousa in the United States Marine Corps as an apprentice to keep him from joining a circus band.[3]

Several years after serving his apprenticeship, Sousa joined a theatrical (pit) orchestra where he learned to conduct. He returned to the U.S. Marine Band as its head in 1880 and remained as its conductor until 1892. Sousa led "The President's Own" band under five presidents from Rutherford B. Hayes to Benjamin Harrison. Sousa's band played at two Inaugural Balls, those of James A. Garfield in 1881, and Benjamin Harrison in 1889.[4][5] The marching brass bass, or sousaphone, a modified helicon, was created by J. W. Pepper  a Philadelphia instrument maker who created the instrument in 1893 at Sousas request using several of his suggestions in its design. He wanted a tuba that could sound upward and over the band whether its player was seated or marching. The sousaphone was re-created in 1898 by C.G. Conn and this was the model that Sousa preferred to use.[6]

He organized The Sousa Band the year he left the Marine Band. The Sousa Band toured from 1892-1931, performing at 15,623 concerts.[7] In Paris, the Sousa Band marched through the streets including the Champs-Élysées to the Arc de Triomphe  one of only eight parades the band marched in over its forty years.[8] The band played for sold-out crowds both in America and around the world,[9] including at the World Exposition in Paris, France.[1]

Late in his life, Sousa lived in Sands Point, New York. Sousa died of heart failure at the age of 77 on March 6, 1932, in his room at the Abraham Lincoln Hotel in Reading, Pennsylvania. He had conducted a rehearsal of "The Stars and Stripes Forever" the previous day with the Ringgold Band. He is buried in Washington, D.C.'s Congressional Cemetery.[11] A school (John Philip Sousa Elementary) and a band shell were named after him and there was a memorial tree planted in nearby Port Washington, New York.[12] Wild Bank, his seaside house on Hicks Lane, has been designated a National Historic Landmark, although it remains a private home and is not open to the public.[13] He was posthumously enshrined in the Hall of Fame for Great Americans in 1976, one of just 102 Americans ever to be honored in such a manner.[1]

Sousa served in the U.S. Marine Corps, first from 1868 to 1875 as an apprentice musician, and then as the head of the Marine Band from 1880 to 1892; he was a Sergeant Major for most of his second period of Marine service.[1]

On May 31, 1917, shortly after the United States declared war on Germany and entered World War I, Sousa was commissioned as a lieutenant in the U.S. Naval Reserve. He was later promoted to the rank of lieutenant commander. During the war, Sousa led the Navy Band at the Great Lakes Naval Station near Chicago, Illinois.[1] Being independently wealthy, he donated his entire naval salary minus one dollar a year to the Sailors' and Marines' Relief Fund. After returning to his own band at the end of the war, he continued to wear his naval uniform for most of his concerts and other public appearances.

For this service during the war, Sousa received the World War I Victory Medal. After the war, he was elected as a Veteran Companion of the Military Order of Foreign Wars.

Sousa wrote 136 marches, published by the Sam Fox Publishing Company beginning in 1917 and continuing until his death.[14] Some of his notable ones are:

Sousa wrote many notable operettas including:

Marches and waltzes have been derived from many of these stage-works. Sousa also composed the music for six operettas that were either unfinished or not produced: The Devils' Deputy, Florine, The Irish Dragoon, Katherine, The Victory, and The Wolf.[24]

In addition, Sousa wrote a march based on themes from Gilbert and Sullivan's comic opera The Mikado, the elegant overture Our Flirtations, a number of musical suites, etc.[25] He frequently added Sullivan opera overtures or other Sullivan pieces to his concerts.[26] He was quoted saying, "My religion lies in my composition.[27]

Sousa had several additional interests outside of music. He wrote three novels  The Fifth String, Pipetown Sandy, and The Transit of Venus  as well as a full-length autobiography, Marching Along and numerous articles and letters-to-the-editor on a variety of subjects. He participated in trapshooting, taking an active role on the national stage in competitions.

As a trapshooter, he ranks as one of the all-time greats, and is enshrined in the Trapshooting Hall of Fame.[28] He organized the first national trapshooting organization, a forerunner to today's Amateur Trapshooting Association (ATA). Sousa remained active in the fledgling ATA for some time after its formation. Some credit Sousa as the father of organized trapshooting in United States. He also wrote numerous articles about trapshooting.[28] Sousa was a regular competitor representing the United States Navy in trapshooting competitions, particularly against the United States Army. Available records indicate that Sousa registered more than 35,000 targets during his shooting career.[29] A quote from his Trapshooting Hall of Fame biography says it best: "Let me say that just about the sweetest music to me is when I call, pull, the old gun barks, and the referee in perfect key announces, dead."[28]

In his 1902 novel The Fifth String, a young violinist made a deal with the Devil for a magic violin with five strings. The strings can excite the emotions of Pity, Hope, Love and Joy the fifth string was of Death and can be played only once before causing the player's own death. He was unable to win the love of the woman he desired. At a final concert, he played upon the death string.[30] In 1905, Sousa published a book Pipetown Sandy, which included a satirical poem titled "The Feast of the Monkeys". The poem described "a lavish party attended by variety of animals, however, overshadowed by the King of Beasts, the lion...who allows the muttering guests the privilege of watching him eat the entire feast". At the end of his gluttony, the lion explained, "Come all rejoice, Youve seen your monarch dine."[31]

In 1920, he wrote a 40,000-word story, "The Transit of Venus". It was about a group of misogynists called the Alimony Club who, as a way of temporarily escaping the society of women, embark on a sea voyage to observe the transit of Venus. The captain's niece, however, had stowed away on board and soon won over the men.[32] Sousa also wrote a booklet, "A manual for trumpet and drum", published by the Ludwig drum company, with advice for playing drums and trumpet. An early version of the trumpet solo to "Semper Fidelis" was included in this volume.[33]

Sousa held a very low opinion of the emerging and upstart recording industry. In a submission to a congressional hearing in 1906, he argued:

These talking machines are going to ruin the artistic development of music in this country. When I was a boy...in front of every house in the summer evenings, you would find young people together singing the songs of the day or old songs. Today you hear these infernal machines going night and day. We will not have a vocal cord left. The vocal cord will be eliminated by a process of evolution, as was the tail of man when he came from the ape.

Law professor Lawrence Lessig cited this passage[34] to argue that in creating a system of copyrights in which control of music is in the hands of record labels, Sousa was essentially correct. Sousa also was credited with referring to records as "canned music," referring to the fact that cylinder records were sold in cans.

Sousa's antipathy to recording was such that he often refused to conduct his band if it was being recorded. Nevertheless, Sousa's band made numerous recordings, the earliest being issued on cylinders by several companies, followed by many recordings on discs by the Berliner Gramophone Company and its successor, the Victor Talking Machine Company (later RCA Victor). The Berliner recordings were conducted by Henry Higgins (one of Sousa's cornet soloists) and Arthur Pryor (Sousa's trombone soloist and assistant conductor), with Sousa quoted as saying,[35] "I have never been in the gramophone company's office in my life." A handful of the Victor recordings were actually conducted by Sousa, but most were conducted by Pryor, Herbert L. Clarke, Edwin H. Clarke, or by four of Victor's most prolific house musicians: Walter B. Rogers (who had also been a cornet soloist with Sousa), Rosario Bourdon, Josef Pasternack, and Nathaniel Shilkret.[35] Details of the Victor recordings are available in the external link below to the EDVR.

Sousa also appeared with his band in newsreels and on radio broadcasts (beginning with a 1929 nationwide broadcast on NBC).[1] In 1999, Legacy Records released some of Sousa's historic recordings on CD.[36] In 1922, he accepted the invitation of the national chapter to become an honorary member of Kappa Kappa Psi, the national honorary band fraternity.[37] In 1925, he was initiated as an honorary member of Phi Mu Alpha Sinfonia, the national fraternity for men in music, by the fraternity's Alpha Xi chapter at the University of Illinois.[38] In 1952, 20th Century Fox honored Sousa in their Technicolor feature film Stars and Stripes Forever with Clifton Webb portraying the composer. Fox music director Alfred Newman arranged the music and conducted the studio orchestra for the soundtrack. It was loosely based on Sousa's memoirs, Marching Along.[39]

This article uses material from the article John Philip Sousa from the free encyclopedia Wikipedia and it is licensed under the GNU Free Documentation License.

Love You Less Ira May
Update Required To play the media you will need to either update your browser to a recent version or update your Flash plugin.