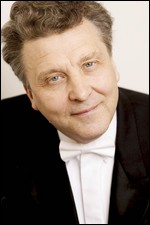 Vassily Serafimovich Sinaisky (Russian: Васи́лий Серафи́мович Сина́йский, born in Abez, Komi Republic, April 20, 1947) is a Russian conductor and pianist. He studied conducting with Ilya Musin at the Leningrad Conservatory and began his career as assistant to Kirill Kondrashin at the Moscow Philharmonic Orchestra. In 1973, he won the Gold Medal at the Karajan Competition in Berlin.

Sinaisky was principal conductor of the Malmö Symphony Orchestra from January 2007 through the 2010-2011 season. With the Malmö orchestra, he has conducted commercial recordings for the Naxos label, including music of Franz Schmidt.[4][5] He became Conductor in Residence at the Bolshoi Theatre with the 2009-2010 season. In August 2010, he was named the Bolshoi's music director and chief conductor.[6] In December 2013, Sinaisky resigned his posts with the Bolshoi Theatre, with immediate effect.[7]

This article uses material from the article Vassily Sinaisky from the free encyclopedia Wikipedia and it is licensed under the GNU Free Documentation License.

Sunshine u-sayn feat. Angelina Silver
Update Required To play the media you will need to either update your browser to a recent version or update your Flash plugin.