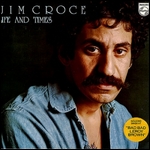 James Joseph Croce, better known as Jim Croce, was born in South Philadelphia, Pennsylvania, on January 10, 1943, to Jim and Flora Croce, and grew up in a family of Italian background.[1] Croce took a strong interest in music at a young age. At five, he learned to play his first song on the accordion, Lady of Spain. He says, "I was the original underachiever. I'd shake that thing and smile, but I was sort of a late bloomer." Croce attended Upper Darby High School in Drexel Hill, Pennsylvania. After his graduation in 1960, Croce went to Malvern Preparatory School for one year before deciding to enroll at Villanova University in 1961. During his time as a student at the university, Croce became a member of the Villanova Singers and Villanova Spires, and was a student disc jockey at WKVU.[2][3]

Croce did not take music seriously other than as a hobby until his time at Villanova, where he formed various bands, performing at fraternity parties, coffee houses, and at universities around Philadelphia, playing "anything that the people wanted to hear: blues, rock, a cappella, railroad music... anything." One of those bands was chosen for a foreign exchange tour of Africa and the Middle East. "We just ate what the people ate, lived in the woods, and played our songs. Of course they didn't speak English over there... but if you mean what you're singing, people understand."

Croce met his future wife Ingrid Jacobson at this time, during a hootenanny at Philadelphia Convention Hall, where he was judging a contest. When they married, he converted to Judaism.

From the mid-1960s to early 1970s, Croce performed with his wife as a duo. At first, their performances included songs by artists such as Ian and Sylvia, Gordon Lightfoot, Joan Baez, and Woody Guthrie, but in time, they began writing their own music. During this time, Croce got his first long-term gig at a rural bar and steak house in Lima, Pennsylvania, called The Riddle Paddock. His set list included every genre from blues to country to rock 'n roll to folk, with soon-to-be-trademark tender love songs and traditional bawdy ballads, always introduced with a story and an impish grin.

In 1968, Jim and Ingrid Croce were encouraged by record producer Tommy West to move to New York City including some time in the Kingsbridge section of the Bronx and record their first album with Capitol Records. During the next two years, they drove more than 300,000 miles[4] playing small clubs and concerts on the college concert circuit promoting their album Jim & Ingrid Croce.

Becoming disillusioned by the music business specifically and New York City in general, they sold all but one guitar to pay the rent and they returned to the Pennsylvania countryside where Jim got a job driving trucks and doing construction to pay the bills while continuing to write songs, often about the characters he enjoyed meeting at the local bars and truck stops.

The couple returned to Philadelphia and Jim decided to be "serious" about becoming a productive member of society. But it was hard to make a living playing in a band, and his previous employment experiences had lost their appeal: "I'd worked construction crews, and I'd been a welder while I was in college. But I'd rather do other things than get burned." His determination to be "serious" led to a job at a Philadelphia R&B WHAT an AM radio station, where he translated commercials into soul. "I'd sell airtime to Bronco's Poolroom and then write the spot: "You wanna be cool, and you wanna shoot pool... dig it." Increasingly frustrated, he quit to teach guitar at a summer camp and enlisted in the U.S. Army. He did not have a very illustrious military career, but said he would be prepared if "there's ever a war where we have to defend ourselves with mops".

In 1970, Croce met the classically trained pianist/guitarist and singer-songwriter Maury Muehleisen from Trenton, New Jersey through producer Joe Salviuolo (aka Sal Joseph). Salviuolo had been friends with Croce when they attended Villanova University together, and Salviuolo later discovered Muehleisen when he was teaching at Glassboro State College in New Jersey. Salviuolo brought the Croce and Muehleisen duo together at the production office of Tommy West and Terry Cashman in New York City. Initially, Croce backed Muehleisen on guitar at his gigs. but in time, their roles reversed, with Muehleisen adding lead guitar to Croce's down-to-earth music.

In 1972, Croce signed to a three-record deal with ABC Records and released two LPs, You Don't Mess Around with Jim and Life & Times that same year. The singles "You Don't Mess Around with Jim", "Operator (That's Not the Way It Feels)", and "Time in a Bottle" (written for his then-unborn son, A. J. Croce) all received airplay. Croce's biggest single, "Bad, Bad Leroy Brown", hit No.1 on the American charts in July 1973.

Croce, 30, Maury Muehleisen, 24, and four others died in a small commercial plane crash on September 20, 1973, shortly before his ABC single, "I Got a Name", was to be released.

Croce had just completed a concert at Northwestern State University's Prather Coliseum in Natchitoches, Louisiana, and was flying to Sherman, Texas, for a concert at Austin College. The pilot and all passengers (Croce; Muehleisen; Croce's booking agent Kenneth D. Cortose; George Stevens, the comic who was the show's warm-up act; and Croce's road manager Dennis Rast) were killed when the plane crashed at around 10:45 pm EDT on September 20, 1973, about an hour after the end of the concert.

Upon the 10:45 pm takeoff from Natchitoches Regional Airport the Beechcraft E18S plane did not gain enough altitude to clear, and the pilot did not maneuver to avoid, a pecan tree at the end of the runway, which investigators said was the only tree for hundreds of yards. The flight conditions were reported as dark, clear sky, calm winds, five plus miles of visibility with haze. The official report from the NTSB[5] lists the probable cause as pilot failure to see and avoid objects or obstructions with factors of pilot physical impairment and fog obstructing vision. The report remarks that the 57 year-old charter pilot, Robert Newton Elliott, had severe coronary artery disease and had run about three miles to the airport from a motel, may have suffered a heart attack. The pilot had an ATP Certificate, 14,290 hours total flight time and 2,190 hours in the Beech 18 type.[6] A later investigation, source unknown, placed sole blame for the accident on pilot error due to his downwind takeoff into a "black hole".[7]

The song "Time in a Bottle" had been featured over the opening and closing credits and during a scene in where Desi Arnez Jr. is opening the 'Don't Mess Around With Jim' album of the ABC made-for-television movie She Lives!, which aired in April 1973,[12] That appearance had generated significant interest in Croce and his music in the week just prior to the plane crash. That, combined with the news of the death of the singer, sparked a renewed interest in Croce's previous albums as well. Consequently, three months later, "Time in a Bottle", originally released on Croce's first album the year before, hit number-one on December 29, 1973, the third posthumous chart-topping song of the rock era following Otis Redding's "(Sittin' On) The Dock of the Bay" and Janis Joplin's recording of "Me and Bobby McGee".

Croce's catalog became a staple of radio play for years, and still receives significant airplay on a variety of radio formats in to the second decade of the 21st century. In 1990, Croce was inducted into the Songwriters Hall of Fame.[13]

Jim and Ingrid Croce's son Adrian James Croce was born September 28, 1971, and is now an accomplished singer-songwriter, musician, and pianist, performing under the name A.J. Croce. He has released seven CDs of original music, beginning with a self-titled CD in 1993, and one best-of CD (Early On: The American Recordings 1993-1998). A.J. Croce is also the owner/operator of his own record label, Seedling Records.[14]

Croce's widow owns and manages Croce's Restaurant & Jazz Bar, a project she and Jim had jokingly discussed a decade earlier, located in the historic Gaslamp Quarter in downtown San Diego, California. She opened the business in 1985.

This article uses material from the article Jim Croce from the free encyclopedia Wikipedia and it is licensed under the GNU Free Documentation License.