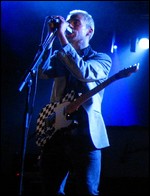 Price's use of the names Jacques Lu Cont and Les Rythmes Digitales was initially a reference to the explosion in demand for French house in the United Kingdom during the 1990s; artists such as Daft Punk, Etienne de Crécy, Dimitri from Paris and Air were all experiencing surges in popularity. Price even went as far as to conduct interviews with British journalists in French via an interpreter. In interviews from around this time, Price also claimed that he had grown up listening exclusively to classical music, until one day encountering the album Dare by the Human League. He also claimed to be a huge Pet Shop Boys fan, since he got his first synthesiser making him able to play songs such as "West End Girls". Price later went on to produce an entire album with Pet Shop Boys - "Electric", released in 2013, which was the duo's most successful album in their home country in twenty years. Certainly, Price was heavily influenced by music from the 1980s, and all his records and sideprojects bear a heavy debt to the 1980s sounds of synthpop bands.

Price was born in Bedale, North Yorkshire, but grew up in Reading, Berkshire.

His song "Jacques Your Body (Make Me Sweat)" was originally released in 1996, then again in 1999, achieving limited success (#60 on the UK Singles Chart).[3] However, the song was later used on a Citroën C4 car advertisement and has since been re-released, reaching #9 on the UK chart in 2005.[3]

His album Darkdancer was released in 1999 under the band name Les Rythmes Digitales following his 1996 solo debut Liberation. He has also released a DJ-mix album, FabricLive.09, under the name Jacques Lu Cont.

Price also successfully released three albums with his rock band, Zoot Woman, 2001's Living in a Magazine, 2003's Zoot Woman and 2009's Things Are What They Used To Be.

Price has produced, and at times co-written, numerous songs for popular artists. Price has also remixed and re-produced numerous songs under his own name as well as the names Thin White Duke (originally used by David Bowie), Jacques Lu Cont, and Les Rhythmes Digitales. Other aliases include Man with Guitar and Paper Faces (an alias for him and Adam Blake of the band Zoot Woman). Price's remixes are characterised by club-lead beats with arpeggios, riffs, and vocal lines faded and filtered throughout the song for a climactic effect. He favours keeping the original vocal arrangement of songs and re-contextualizing the lyrical content in creating his new versions.

Price is best known for his work with Madonna which spanned almost a decade culminating in Madonna's tenth studio album Confessions on a Dance Floor (2005). He began collaborating with Madonna as musical director for her 2001 Drowned World Tour after remixing some of the tracks on her Music album via Mirwais. He reprised the role for her 2004 Re-Invention World Tour and 2006 Confessions Tour. Price created remixes for the album's singles "Hung Up", "Sorry" (under the Man with Guitar alias), "Get Together", and "Jump", as well as the album tracks "I Love New York" and "Let It Will Be" (under the Paper Faces alias). Price co-wrote the song "X-Static Process" for Madonna's 2003 album American Life. Price has also remixed the Madonna songs "Hollywood" from American Life and "Miles Away" from the album Hard Candy. Madonna chose his remix of "Hollywood" for her performance at the MTV Video Music Awards with Britney Spears, Christina Aguilera, and Missy Elliott.

Work with The Killers

Price's work with The Killers began with his remix of their hit single "Mr. Brightside", released under the Thin White Duke name. Subsequently, Price remixed the song "When You Were Young", the first single from The Killers album "Sam's Town". Price produced two of the tracks re-recorded for the release of The Killers' B-sides album, Sawdust: "Leave the Bourbon on the Shelf" and "Sweet Talk". His remix of "Mr. Brightside" appeared as a bonus track on that release. Price went on to produce The Killers' third studio album, "Day & Age", released on 24 November 2008.[4] He also created an extended remix of the lead single "Human" released under the Thin White Duke name. Price also worked for The Killers vocalist Brandon Flowers' debut solo album Flamingo, producing most of the songs on it, including the second single "Only the Young". The album was released on 6 September in the UK and Ireland and 14 September in the US and Canada.

The Killers' most recent album, Battle Born, contains two tracks that Price produced, as well as a Jacques Lu Cont remix of the album's first track, "Flesh and Bone".[5]

Price executively produced their 2013 album Electric which was very highly acclaimed by critics and reached #3 on the UK Albums Chart - their highest charting album since 1993.[6] He also toured with them on at least one show in the Electric tour (Las Vegas).

Price was also reported to be working with New Order's Bernard Sumner on a "synthesiser album".[8] However, it appears the project has been shelved[9]

Price co-produced the new Scissor Sisters album, released on 28 June 2010,[10] entitled Night Work. The first track to be released from the album is "Invisible Light". The first official single off the album was "Fire With Fire", followed by "Any Which Way".

Price is the executive producer for Kylie Minogue's 11th studio album titled Aphrodite which was released on 5 July 2010. On 11 June, the hit single "All the Lovers" was released, and later "Get Outta My Way", which was remixed by Price into an extended version.

In 2011, Price worked as a producer on indie rock band Hard-Fi's much anticipated 2011 album "Killer Sounds". He worked with the band for second single "Fire in the House".

He is also known to be featured on the debut of Queen of Hearts. (citation needed)

In May 2012, The fourth Scissor Sisters album Magic Hour was released with two tracks produced by Stuart Price: "The Secret Life of Letters" and "Somewhere".

For the London Olympic Games, Price was asked to create a theme song as the keystone of what director Danny Boyle called the "sonic branding" of the games. Intended to be played in multiple venues, Price set out to create a modular piece, "Different elements can layer on top of each other to create a fast-paced version for the velodrome, something slow for the background on TV, or a triumphant version of it for the medal ceremonies."[11]

Price remixed Coldplay's single "Viva la Vida", released on the band's website as the Thin White Duke remix. Price has also produced and mastered tracks for Frankmusik's debut album, one of which is "3 Little Words". This track was released as a single on the "3 Little Words" EP. He provided two Thin White Duke remixes for the release of Depeche Mode's 2009 single, "Wrong".

In 2009, Price remixed "It's Not My Problem" for Sneaky Sound System under the Thin White Duke alias, as well as doing remixes for Depeche Mode's "Wrong", Friendly Fires' "Jump in the Pool", Röyksopp's "This Must Be It" and, most recently, Muse's "Undisclosed Desires". Producing the tour arrangement for the Pandemonium Tour by Pet Shop Boys, Price fulfilled a personal dream. He also produced an exclusive arrangement for Pet Shop Boys' Brit Awards performance in February. Both older hits and brand new songs were combined to create a ten-minute-long mash up that closed the 2009 Brits.

Under his Jacques Lu Cont alias, he released several massive club remixes including ones for U2, Katy Perry, Miike Snow and Coldplay.

In June 2012 his remix of Charlie Brown was rejected by Coldplay,[12] though Price did end up having it released through Annie Mac's show on BBC Radio One on 13 July.[13]

He also created a remix of Juliet's "Avalon".

Price won his first Grammy Award in 2004 for his remix of No Doubt's "It's My Life" produced under the moniker Thin White Duke. In 2005, he was nominated for two Grammys: one for his production of New Order's "Guilt Is a Useless Emotion" and a second for his remix of The Killers' "Mr. Brightside". He won a second Grammy in 2006 for his remix of Coldplay's "Talk" (as Thin White Duke). He was also nominated in 2007 for Best Dance Recording with Madonna on the single "Get Together" from the album Confessions on a Dance Floor. Price won his third Grammy in 2007 for Best Electronic / Dance Album for Madonna's Confessions on a Dance Floor.

It was announced on 18 November 2011 that Price would return to producing his own music with the intention of releasing a new album as Les Rythmes Digitales.[15] However, on 14 July, in the interview preceding his Essential Mix with Pete Tong, he stated, "I don't know whether it's gonna be Les Rythmes Digitales, I don't know if its gonna be Jacques Lu Cont, I don't know if it's gonna be a Thin White Duke album. I think the material always just has to kind of... has to lead the way. So what I'll call it? Still to be determined."[16]

The single "Reload" was made available on SoundCloud at the end of November 2011, and in February 2012 the single "Church" was posted under the name Jacques Lu Cont. Around the same time he released his remix of Paddling Out by Miike Snow. He has continued to release tracks for free download via his Soundcloud page, including the London train system inspired "Underground" on 12 July.

In April 2012, Price performed at the Coachella Music Festival as Jacques Lu Cont in a mid-Saturday set playing original tracks from his new album as well as newer remixes of such songs as New Order's Blue Monday and Miike Snow's Paddling Out.

On 14 July, Price was finally invited to produce a two-hour set for BBC Radio One's Essential Mix, saying "I've been waiting 15 years for this, Pete." [16] His tracklist included many unreleased demos of his own work, influences like Depeche Mode and the Pixies, although it primarily consisted of tracks by his contemporaries.[17]

Price is the producer of the 12th studio album & latest tour from Pet Shop Boys, entitled Electric. The album was announced on 14 March 2013 and was released 15 July. Price previously produced the medley Pet Shop Boys performed at the 2009 BRIT Awards, upon their being lauded with the Outstanding Contribution To Music statue. He also reworked Neil and Chris single Memory Of The Future.[19]

Price receives songwriting or production credit for the following songs:

This article uses material from the article Stuart Price from the free encyclopedia Wikipedia and it is licensed under the GNU Free Documentation License.