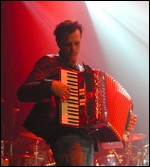 Charlie Gillingham (born Charles Thomas Gillingham, January 26, 1960, Torrance, California) is best known for his performance on the Hammond B-3 organ, accordion, piano, and keyboards for the band Counting Crows. He has also played the bass guitar in live shows during certain songs such as "Holiday in Spain".

In 2004, Gillingham was nominated for an Oscar as co-composer of the song "Accidentally in Love". He was put forward in the category Academy Award for Best Original Song with his fellow songwriters Adam Duritz, Jim Bogios, David Immerglück, Matt Malley, David Bryson and Dan Vickrey.[1] The track was used in the film Shrek 2.

Apart from his work with Counting Crows, Gillingham also contributed to the following recordings:[2]

This article uses material from the article Charlie Gillingham from the free encyclopedia Wikipedia and it is licensed under the GNU Free Documentation License.

Tu Umberto Tozzi
Update Required To play the media you will need to either update your browser to a recent version or update your Flash plugin.