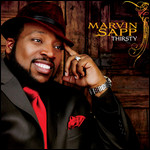 Pastor Marvin Louis Sapp (born on January 28, 1967) is an American Gospel music singer-songwriter who recorded with the group Commissioned during the 1990s before beginning a record-breaking solo career. Sapp is also the founder and senior pastor of Lighthouse Full Life Center Church, located in Grand Rapids, Michigan.

Sapp was born and raised in Grand Rapids, Michigan, and began singing in church at age four. He spent his teenage years singing with a number of Gospel groups and ensembles. He was a student at the unaccredited Aenon Bible College in Indianapolis, Indiana.[1] He dropped out of Aenon after being invited by Gospel singer Fred Hammond to sing with Commissioned in 1991 after Keith Staten left. Sapp appears on the group's albums Number 7, Matters of the Heart, and Irreplaceable Love. Sapp left in 1996 and was replaced by Marcus R. Cole.

Sapp recorded Thirsty 's follow-up album, Here I Am, on October 16, 2009 at Resurrection Life Church in Wyoming, Michigan and released it on March 16, 2010. With its release, Sapp became the all-time highest charting gospel artist in Billboard's 54-year history of tracking album sales.[3] By selling approximately 76,000 copies of Here I Am its first week out, the album debuted at No. 2 on the Billboard 200 chart, making Here I Am the highest charting album ever by a gospel artist.[2] Here I Am's lead single, "The Best in Me," which was co-written by the album's producer, Aaron Lindsey (Israel Houghton), peaked at No. 14 on the Billboard Hot R&B/Hip-Hop Songs chart, No. 1 on Billboard's Gospel Songs chart[4] and reached No. 20 (with a bullet) on Billboard's Urban AC chart. On January 15, 2011, Marvin Sapp topped the list of winners during the 26th Annual Stellar Gospel Music Awards [5]

Sapp is the widower of MaLinda Sapp, who served as the Administrative Pastor at his Lighthouse Full Life Center Church. MaLinda died September 9, 2010, from complications of colon cancer.[6] Sapp has three children, Marvin II, Mikaila, and Madisson. On March 21, 2009, Sapp was initiated into the Grand Rapids Alumni Chapter of Kappa Alpha Psi fraternity. Sapp likes to appear in a church in Douglas, Georgia, called Hightower Memorial Temple. Sapp has been awarded honorary doctorate degrees from two non-accredited institutions, a Doctor of Divinity Degree from Aenon Bible College and the Doctor of Ministry Degree from Friends International Christian University.

This article uses material from the article Marvin Sapp from the free encyclopedia Wikipedia and it is licensed under the GNU Free Documentation License.

Heaven In Your Eyes Loverboy
Update Required To play the media you will need to either update your browser to a recent version or update your Flash plugin.