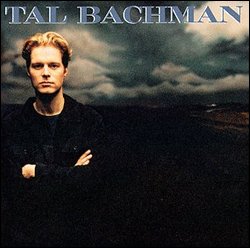 Bachman got his musical break when executives at EMI Music Publishing in New York City heard a demo tape, and aided him in securing a record deal with Columbia Records. Bob Rock (of Metallica, Aerosmith, Mötley Crüe, and Skid Row fame) signed on to co-produce his debut album. His first album, Tal Bachman, featured what would eventually become his hit single, "She's So High",[3] which reached No. 1 on three different radio formats in Canada. The song became a multi-format Top 10 hit in the United States and internationally, earning BMI's "Song of the Year" award. The album earned Bachman two Juno awards in Canada, and much media exposure, including appearances on The Tonight Show with Jay Leno, MTV, MuchMusic, and E Network; and profiles, interviews, and reviews in Rolling Stone, Q Magazine, USA Today, Interview, and the Los Angeles Times. In support of the record, Bachman toured as an opening act for Bryan Adams and the Barenaked Ladies, and also toured in his own right.

Bachman's second album, Staring Down the Sun, was released in Canada on Sextant Records in August 2004 and was released in the United States by Artemis Records in 2006. The single "Aeroplane" reached No. 20 on the Canadian charts and was used in the 2005 film, American Pie Presents: Band Camp. It was played as an instrumental and during the credits.

Bachman lives in Victoria, British Columbia, and is the son of Canadian rocker Randy Bachman, of the classic rock bands The Guess Who and Bachman–Turner Overdrive. Growing up, Bachman attended Semiahmoo Secondary School in Surrey, BC. His early year music/vocal teacher was Mr. Dagan Lowe.

He is a former member of The Church of Jesus Christ of Latter-day Saints, and went on a two-year mission to Argentina, but after two years of research into that church's origins, Bachman concluded that the church's founder Joseph Smith had invented his stories, and severed his ties to that church.

As the holder of a bachelor's degree in political science, Bachman has moonlighted as a political commentator.

He plays right-wing and outside-centre for the Victoria, BC rugby club Castaway Wanderers RFC.[4]

In September 2011, Tal performed "She's So High" in Vancouver during a Taylor Swift concert.[7]

This article uses material from the article Tal Bachman from the free encyclopedia Wikipedia and it is licensed under the GNU Free Documentation License.

Gotta Move Monotales
Update Required To play the media you will need to either update your browser to a recent version or update your Flash plugin.