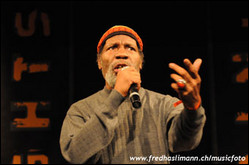 Abiodun Oyewole (born Charles Davis, February 1948), is a poet, teacher and founding member of the American music and spoken-word group The Last Poets, which developed into what is considered to be the first hip hop group.[1] Critic Jason Ankeny wrote, "With their politically charged raps, taut rhythms, and dedication to raising African-American consciousness, the Last Poets almost single-handedly laid the groundwork for the emergence of hip-hop."[2]

Abiodun was born in Cincinnati, Ohio and he moved with his maternal aunt and her new husband at age three to Queens, New York. At the age of 15, he attended a Yoruba Temple in Harlem. It was there that he was given the name by which he is best known.

As a youth, Abiodun was influenced by jazz and gospel music played by his parents and the poems of Langston Hughes.

The group was born on May 19, 1968, Malcolm X's birthday, when Abiodun and two others, David Nelson, Gylan Kain, read poetry in tribute to Malcolm X. The group was based in black nationalism and quickly became known throughout the African-American community. They are generally credited, along with Gil Scott-Heron, as being major influences on the development of hip hop.

At one point, Oyewole was forced to leave the group as he spent four years in a North Carolina prison, convicted of larceny. After serving two and a half years of a three-year sentence, because of good behavior he was eligible for study release during the day. Oyewole continued his education at a nearby college and earned his undergraduate degree. He subsequently went on to earn a doctorate from Columbia University in New York City, where he once served as a member of the faculty.

In 1994, Oyewole appeared on the Red Hot Organization's compilation CD, Stolen Moments: Red Hot + Cool, appearing on a track titled "This is Madness" alongside Omar Ben Hassen and Pharaoh Sanders.[3] The album was named "Album of the Year" by Time Magazine.

Recently, Abiodun has been touring the world giving lectures on poetry and politics.

Most recently he has taught at the Schomburg Center for Research in Black Culture in Harlem.

This article uses material from the article Abiodun Oyewole from the free encyclopedia Wikipedia and it is licensed under the GNU Free Documentation License.

Whatever happened to Benny Santini? Chris Rea
Update Required To play the media you will need to either update your browser to a recent version or update your Flash plugin.