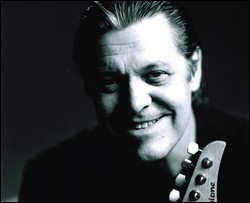 Georg "Jojje" Wadenius (born May 4, 1945) is a guitarist, bassist, singer and composer who made a name for himself during the 1970s and 80s as a studio and session guitarist/bassist, as well as releasing a popular series of albums of children's songs in Sweden.

Wadenius was born in Stockholm, Sweden, where he attended Adolf Fredrik's Music School. After appearing on a number of Swedish hit records and being founder-member of two Swedish supergroups of the early 70s, Made in Sweden (1966-1972 and 1976) and Solar Plexus (1971-1972), he relocated to the United States to become lead guitarist of the US supergroup Blood, Sweat & Tears from 1972 to 1975. In 1979 he joined The Saturday Night Live Band on television. He stayed on until 1985 and has since worked for many important artists as a session player and/or touring musician, among them Steely Dan, Aretha Franklin, Diana Ross, Dr. John, David Sanborn, James Brown, Marianne Faithfull, Kent, Paul Simon, Joe Thomas, Dionne Warwick, Roberta Flack, Donald Fagen, Doug Katsaros, Paul Desmond, Jim Hall, John McLaughlin, Michael Franks, and Luther Vandross, as well as many important artists in Sweden.

In 1970, he received a Swedish Grammis for Made in Sweden and another for his work on children's songs.

In recent years he has spent more time producing other Scandinavian performers, including Anne Sofie von Otter, and in 2001 he set up a recording studio in Oslo, Norway.

with Made in Sweden

as a session musician

This article uses material from the article Georg Wadenius from the free encyclopedia Wikipedia and it is licensed under the GNU Free Documentation License.

Such A Shame Talk Talk
Update Required To play the media you will need to either update your browser to a recent version or update your Flash plugin.