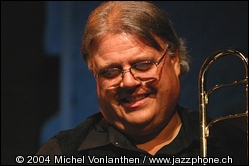 David 'Dave' W Bargeron (born September 6, 1942 in New York City) is an American trombonist and tuba player from Athol, Massachusetts, most famous for playing with the jazz-rock group Blood, Sweat, and Tears. He joined the group in 1970, after Jerry Hyman departed, and first appeared on the album Blood, Sweat & Tears 4. With this group at the album Live and Improvised (1975) played jazz-rock solo on the tuba "And When I Die/One room country shack" Medley. He is often compared to trombonist James Pankow of Chicago and Jim Pugh of the Woody Herman band.

He was lead trombonist with Clark Terry's Big Band, and (from 1968-1970), played bass trombone and tuba with Doc Severinsen's Band. His recording credits with BS&T include eleven albums. A break in their schedule allowed Dave to join the Gil Evans Orchestra in 1972, and he remains a member of that Orchestra to this day.

Bargeron often plays a King 3B with a sterling silver bell and uses a Besson EEb tuba. Examples of his work can be heard on the BS&T songs "Go Down Gambling", "Redemption," "Snow Queen," and "No Show."

After leaving BS&T, Dave became a freelance recording and jazz artist. Based in New York City, he has recorded with Paul Simon, Mick Jagger, James Taylor, Eric Clapton, David Sanborn, Carla Bley and Pat Metheny. Dave currently records and tours internationally with the George Gruntz Concert Jazz Band from Switzerland, the George Russell Living Time Orchestra, and was a long-time member of Jaco Pastorius' Word of Mouth Band. He also records and tours with 'Tuba Tuba', a jazz tuba band in which he plays with Michel Godard, Luciano Biondini, and Kenwood Dennard. 'Tuba Tuba' tours Europe and performs at various jazz festivals and master classes. He is also a charter member of Howard Johnson's "Gravity," the 6-tuba group that has been together since 1968.

Bargeron has released several CDs, both as a soloist and in collaboration with others. He now lives in New York and has four children.

This article uses material from the article Dave Bargeron from the free encyclopedia Wikipedia and it is licensed under the GNU Free Documentation License.

Best of You Andy Grammer
Update Required To play the media you will need to either update your browser to a recent version or update your Flash plugin.