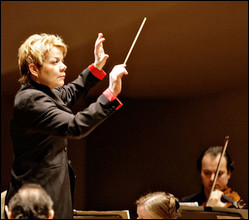 Alsop was born in New York City to professional musician parents. She attended Yale University, but later transferred to the Juilliard School, where she earned a bachelor's and a master's degree in violin. She founded the string ensemble String Fever in 1981. She won the Koussevitzky Prize as outstanding student conductor at the Tanglewood Music Center in 1989.

In September 2007, Alsop was appointed the 12th music director of the Baltimore Symphony Orchestra (Baltimore SO[3]), having been named Music Director Designate for the 2006-2007 concert season. Her selection was noteworthy because Alsop is the first woman to hold this position with a major American orchestra. The initial controversy surrounding her choice stemmed from significant resistance from the orchestra's players, who insisted they had not had enough voice in the search process. The orchestra and Alsop met after the announcement and apparently smoothed over some of their differences.[4][5] In June 2009, the orchestra announced the extension of her contract for another five years, through August 2015.[6] In July 2013, the Baltimore SO announced a further extension of her contract as music director through the 2020-2021 season.[7][8]

Since she became music director, Alsop's initiatives with the Baltimore SO have included the "Webumentary Film Series" and a free iTunes podcast, "Clueless About Classical." She recently announced a new educational program called "OrchKids", in which underprivileged Baltimore children will receive free music instruction, based on Venezuela's El Sistema program. Alsop was elected a Fellow of the American Academy of Arts and Sciences in 2008.[9]

In the UK, Alsop has served as principal guest conductor with the Royal Scottish National Orchestra and with the City of London Sinfonia.[10] Alsop was Principal Conductor of the Bournemouth Symphony Orchestra (Bournemouth SO) from 2002 to 2008.[11] She was voted Gramophone magazine's Artist of the Year in 2003 and won the Royal Philharmonic Society's conductor's award in the same season. In April 2007, Alsop was one of eight conductors of British orchestras to endorse the 10-year classical music outreach manifesto, "Building on Excellence: Orchestras for the 21st Century", to increase the presence of classical music in the UK, including giving free entry to all British schoolchildren to a classical music concert.[12] Alsop received an honorary degree of Doctor of Music from Bournemouth University on 7 November 2007. Alsop served as an Artist-in-Residence at the Southbank Centre, London, for the 2011-2012 season.[13]

In 2012, Alsop became principal conductor of the São Paulo State Symphony Orchestra.[14] Her work with the São Paulo orchestra has included a European tour, including its first-ever appearance at the Proms in August 2012,[15] the first Proms appearance by any Brazilian orchestra.

On 7 September 2013 she became the first woman to conduct the Last Night of the Proms.

Since 1990, Alsop's partner has been Kristin Jurkscheit, a horn player. They have a son, and Alsop has spoken publicly about her family.[16][17][18] While Alsop was conducting the Colorado Symphony Orchestra, of which her partner was a member, their relationship provoked controversy, though Alsop replied that the relationship predated her appointment to lead the orchestra and had no bearing on her job performance.[5]

Alsop conducted her first recording in 2000 with the Royal Scottish National Orchestra in a selection of works by Samuel Barber, which was released as part of the American Classics Series on Naxos. This disc was followed by four more released between 2001-2004 dedicated to the works of Samuel Barber. In 2003, she released her first disc of Leonard Bernstein which she recorded with the Bournemouth SO and Chorus, with the Symphonic Suite from On The Waterfront and the Three Dance Episodes from On The Town. Following this, in 2005, Alsops fully staged production of Bernsteins Candide with the New York Philharmonic Orchestra was nominated for an Emmy Award (DVD: PBS Great Performances/ Image Entertainment).

In June 2006, Alsop conducted the Baltimore SO and violinist Joshua Bell in John Coriglianos Concerto for Violin and Orchestra, The Red Violin, recorded by Sony Classics and released in September 2007. She also led the Baltimore SO in Stravinskys The Rite of Spring, which became the orchestra's first-ever live-recording release on iTunes. Following her advent to the Baltimore post, one of her first projects as Music Director was a series of recordings of Dvoák for Naxos. The first disc in the series, featuring Symphony No. 9, From the New World, and Symphonic Variations, was released in February 2008, and was nominated for BBC Music Magazines 2008 Album of the Year.

Other highlights of Alsops recording collaboration with Naxos include a Brahms symphony cycle with the London Philharmonic Orchestra (the first commercially recorded Brahms symphony cycle by a female conductor) and an ongoing series of Bournemouth SO recordings, which include Bartóks Miraculous Mandarin, Bernsteins Chichester Psalms and the symphonies of Kurt Weill.

Other recent releases include Dvorak symphonies 7 & 8 with Baltimore, Nixon in China and works by Harris, Copland and Barber, all on the Naxos label. In 2012, Alsop and the Baltimore SO released a recording of Mahler Symphony No. 1, also on Naxos.

This article uses material from the article Marin Alsop from the free encyclopedia Wikipedia and it is licensed under the GNU Free Documentation License.

All You Zombies Hooters
Update Required To play the media you will need to either update your browser to a recent version or update your Flash plugin.