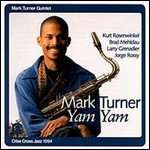 He is considered one of the most influential tenor saxophonists of his generation.[1]

Born in Fairborn, Ohio, and raised in the small Southern California town of Palos Verdes, Turner originally intended to become a commercial artist. In elementary school he played the clarinet, followed by the alto and tenor saxophones in high school. He attended California State University, Long Beach in the 1980s (playing in the jazz ensembles) and then transferred to and graduating from Berklee College of Music in 1990 before moving to New York. Turner worked at Tower Records in New York City for an extended period before working full-time as a jazz musician.[2] Turner performed extensively with pianist Brad Mehldau during the 1990s.

In early November 2008 Turner injured two fingers on one of his hands with a power saw, but as of late February 2009 he was performing again with the Edward Simon Quartet at the Village Vanguard.

Although Turner last released an album as a leader in 2001, he has an upcoming release scheduled for 2014 on ECM with his quartet featuring trumpeter Avishai Cohen, bassist Joe Martin, and drummer Marcus Gilmore.

Turner's sound is reminiscent of that of Warne Marsh. He also has elements of John Coltrane in his playing. Turner has mentioned both Marsh and Coltrane as influences, and has used elements of both players' styles in his music.[3] Turner's range extends into the high altissimo register. His improvised lines tend to be harmonically and rhythmically convoluted while maintaining melodic coherence. His compositions often make use of repeated patterns, odd-metered time signatures, intervallic leaps, and a selective use of space.[4]

In addition to leading his own quartet with trumpeter Avishai Cohen, bassist Joe Martin, and drummer Marcus Gilmore,[5] Turner is also a member of the trio Fly, which features himself, bassist Larry Grenadier, and drummer Jeff Ballard.[6] Turner is a member of guitarist Gilad Hekselman's Quartet, and drummer Billy Hart's Quartet.[7] He has been featured extensively on records by guitarist Kurt Rosenwinkel, saxophonist David Binney, and pianist Aaron Goldberg, among others.[8]

This article uses material from the article Mark Turner (musician) from the free encyclopedia Wikipedia and it is licensed under the GNU Free Documentation License.

Jackie Brown John Cougar Mellencamp
Update Required To play the media you will need to either update your browser to a recent version or update your Flash plugin.