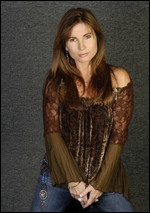 Robin Beck (born November 7, 1954 in Brooklyn, New York) is an American singer. She topped the singles chart in the United Kingdom in 1988,[1] and Germany in 1989, with her single "First Time", which had come to the public's attention via its use in a Coca-Cola commercial. Other well-known songs of hers are "Save Up All Your Tears", "In My Heart to Stay", "Tears in the Rain" and "Close to You".

Also, "First Time" was successfully covered or sampled many times, the most recent was made by Sunblock in 2006, peaking at number nine on the UK Singles Chart. Beck also performed it with German pop star Helene Fischer.

Prior to this achievement, she had spent time as a backing singer, supporting the efforts of Melissa Manchester, Chaka Khan, and Leo Sayer. She also sang on radio jingles for Jam Creative Productions, in particular "the ultimate one" for BBC Radio One in the UK.[2][3] Her first album was released in 1979, and featured Irene Cara and Luther Vandross on backing vocals.[4] However, her subsequent debut album's songs failed to achieve commercial success in the United Kingdom, although it later spawned "Save Up All Your Tears" which hit the Top 10 in Germany. After this, Robin contributed backing vocals to Cher's "If I could Turn Back Time, and another version of Cher's song "Save Up all Your Tears", both of which had radio success world wide.

Her major hit coincided with a unique chart confluence; after waiting thirty-five years for the first instance of three consecutive female vocalists at the top of the UK Singles Chart, she completed the second such occurrence in under a year. The first sequence was Belinda Carlisle, Tiffany and Kylie Minogue in 1988; the second threesome consisted of Whitney Houston, Enya and Robin Beck. She qualifies as a one-hit wonder in the UK, as "First Time" is her only single to reach their chart.[1] This is not the case in Germany, where "Save Up All Your Tears" reached number 10, and she had at least three other chart singles. The German success of "First Time" won Beck a 1990 RSH Gold award,[5] given annually by a German radio station since 1988 on the basis of major regional airplay success.[6]

Her album Trouble Or Nothin' was produced by Desmond Child and featured songs by Child, Diane Warren, Holly Knight, Tom Kelly and Billy Steinberg. Despite their track record of success in the US, Beck's material did not find success. The song, "Hide Your Heart", charted in both the US and the UK as a single by KISS the same year as Beck's version was released. It was also recorded that year by Ace Frehley and Molly Hatchet, and was the title track of Bonnie Tyler's album of the previous year. Two other songs from the Beck album were released as singles by Tyler — "If You Were a Woman (And I Was a Man)" (1986) and "Save Up All Your Tears" (1988) — and one by John Waite, "Don't Lose Any Sleep" (1987). Despite the songwriters' hit track records, none of those songs were major hits in the US in any of their versions. "A Crazy World Like This", co-written by Neil Giraldo, had been an album cut for Pat Benatar.

Beck went on to record further solo work with noted writers, which was best received in Germany, and continued to do guest vocal spots on other artists' albums, including a duet with Stan Bush.[7] After a hiatus, she returned in 2003 with her first album in nine years, and has followed that up with a new album every couple of years since.

Robin and her husband James Christian sang a duet on the song "Easy's Getting Harder" on Tommy Denander's 3rd Radioactive album "Taken" in 2005.

In 2006, the Swedish dance outfit Sunblock sampled "First Time" for their dance track "First Time". Beck could be seen performing this song, which was released on the 21 May, and reached number 9 in the UK Singles Chart. 2007 saw the release of Livin' On a Dream.[8]

Her album Trouble Or Nothing - 20th Anniversary Edition, was released in February 2009, which featured new recordings of original album tracks, plus four new songs co-written with Tommy Denander, who also handles guitars on the whole album as well as co-producing the new tracks. Also in 2009, she recorded three tracks as a special guest on Impulsia's debut album, Expressions: "Fly Away", "Alone" and "Seas To Cross".

In 2010, she appeared on a track as lead vocalist for the debut album of the Italian project Shining Line.

In 2011 she released her seventh album The Great Escape and also recorded vocals for the British NWOBHM band Saracen on their album Marilyn, depicting the life of Marilyn Monroe. It was released in September 2011.[9] In 2012 she performed at the Firefest and was part of the Rock Meets Classic-Tour.

In 2013 she released her eighth album Underneath on August 12 in the UK and August 15 in Europe. Beck was interviewed most recently in 2013 by Paradise Rock.[10]

On March 6, 2014, Beck started her "Perfect Strom Tour", co-headlined by House of Lords and Estrella.

It was revealed in April 2015 that Robin Beck was part of the Rockingham lineup at Nottingham's Rock City October 23–25. Beck's appearance is scheduled for the Friday, with Eclipse and headliner Tom Keifer (Cinderella) following her in the line up.[12]

Her ninth album, Love Is Coming, will be released by Frontiers on October 13, 2017.

Beck has been married to James Christian of the hard rock band House of Lords since 1996. They have a daughter named Olivia (born 1997).

This article uses material from the article Robin Beck from the free encyclopedia Wikipedia and it is licensed under the GNU Free Documentation License.