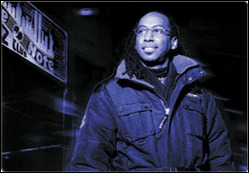 Omar Hakim (born February 12, 1964) is an American jazz, jazz fusion and pop music drummer, producer, arranger and composer. He has performed for some of the most high-profile music artists in the world, including David Bowie, Sting, Madonna, Dire Straits, Journey, Kate Bush, George Benson, Miles Davis, Mariah Carey and Celine Dion. Bowie described Hakim as "a fascinating drummer, with impeccable timing" and "always fresh in his approach".[1]

A graduate of the New York School of Music and Art, Omar Hakim began his career recording with various pop and soul groups. His father, Hasan Hakim, had played trombone for Duke Ellington and Count Basie and that influence helped to warm the younger Hakim's ear up for the part he would play in one of the most famous jazz fusion acts ever, Weather Report.

Hakim credits jazz vibraphonist Mike Mainieri with giving him his first break in 1980; Hakim appeared in a video with Mainieri called The Jazz Life and began working with singer Carly Simon through Mainieri. Hakim first came to major attention as a member of Weather Report.

Hakim played drums on David Bowie's most commercially successful album, 1983's Let's Dance, as well as the follow-up, Tonight, in 1984. In the same year, Hakim did most of the drum work on Dire Straits' album Brothers in Arms, when the previous drummer Terry Williams' performance was found unsuitable for the desired sound of the album after most of the songs had already been recorded. Hakim recorded all the drum tracks on the album in two days and then left. Williams was, however, brought back for the tour. Hakim was also part of the band for Sting's first solo album, The Dream of the Blue Turtles, appearing in the film Bring on the Night.

By this time, Hakim was teaching himself to program drum machines, which put him in even greater demand as a pop, rock, and R&B session musician, and landed him work with Madonna. Meanwhile, he continued his work as a jazz fusion drummer; just a partial list of his credits over the 1980s and '90s includes work with Miles Davis, David Sanborn, Roy Ayers, George Benson, Joe Sample, John Scofield, Lee Ritenour, Toninho Horta, and Najee. In December 1989, Hakim released his first solo album, Rhythm Deep, which occupied a middle ground between jazz, R&B, and pop, and gave him a chance to showcase his vocal abilities as well. The results earned Hakim a Grammy nomination in early 1990.

During the 1990s, Hakim continued to improve his skills in the realm of electronic percussion, keeping abreast of new technologies and thereby keeping his session career in good stead. He performed on albums by Mariah Carey, Celine Dion, and Jewel, among other successful pop stars, and initially kept his jazz work going as well, though it had tapered off by the middle of the decade.

In 2000 Hakim released his second solo CD, The Groovesmith, which was produced, recorded and mixed in his personal recording studio "The OH-Zone". In 2010 Omar formed a band with wife Rachel Z called "The Trio of OZ" and they recorded and toured extensively internationally behind their highly successful eponymous release. In 2014, he released his third album, entitled We Are One with great critical reception. He is currently in the studio working on the second "The Trio of OZ" to be released in 2016 on his label OZmosis Media Group.

Hakim played drums for the Kate Bush 22-night residency called Before the Dawn in London from August 26 – October 1, 2014 at the Hammersmith Apollo.

On June 18, 2015 Journey announced that Hakim would replace longtime drummer Deen Castronovo on their North American tour after Castronovo was arrested for domestic violence in Salem, Oregon.[2]

Between 1988 and 1989 Hakim appeared regularly as the house band drummer in The Sunday Night Band during the first half season of the acclaimed music performance program Sunday Night on NBC late-night television.[3] After being temporarily replaced by drummer J. T. Lewis for the remainder of that season, Hakim reappeared in the band for the second season in the fall of 1989, when the program returned under the new name Night Music.[4]

This article uses material from the article Omar Hakim from the free encyclopedia Wikipedia and it is licensed under the GNU Free Documentation License.

Ma Che Bello Questo Amore Eros Ramazzotti
Update Required To play the media you will need to either update your browser to a recent version or update your Flash plugin.