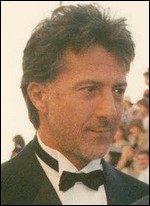 Hoffman was born in Los Angeles, California,[1] the son of Lillian (née Gold) and Harry Hoffman, who worked as a prop supervisor/set decorator at Columbia Pictures before becoming a furniture salesman.[2][3] His brother, Ronald, is a lawyer and economist. Hoffman's family was Jewish, although he did not have a religious upbringing.[4][5] He graduated from Los Angeles High School in 1955. He enrolled at Santa Monica College with the intention of studying medicine but left after a year to join the Pasadena Playhouse.[6]

Hoffman began acting at the Pasadena Playhouse with Gene Hackman. After two years at the playhouse, Hackman headed for New York City, and Hoffman soon followed. He worked a series of odd jobs, including coat checking at restaurants, working in the typing department of the city Yellow Pages directory, and stringing Hawaiian leis, while getting the occasional bit television role. To support himself, he left acting briefly to teach. He worked as a professional fragrance tester for Maxwell House. He also did the occasional television commercial. An often-replayed segment on programs that explore actors' early work is a clip showing Hoffman touting the Volkswagen Fastback.

In 1960, Hoffman landed a role in an off-Broadway production and followed with a walk-on role in a Broadway production in 1961. Hoffman then studied at the famed Actors Studio and became a dedicated method actor. His first critical success was in Eh? by Henry Livings which had its US premiere Off-Broadway at the Circle in the Square Downtown on October 16, 1966.

Through the early and mid-1960s, Hoffman made appearances in television shows and movies, including Naked City, The Defenders and Hallmark Hall of Fame. Hoffman made his theatrical film debut in The Tiger Makes Out in 1967, alongside Eli Wallach.

Between acting jobs, Hoffman also made ends meet by teaching acting at a community college night school, and by directing off-broadway and community theater productions. In 1967, immediately after wrapping up principal filming on The Tiger Makes Out, Hoffman flew from New York City to Fargo, North Dakota, where he directed a production of William Saroyan's The Time of Your Life for the Emma Herbst Community Theatre. The $1,000 he received for the eight-week contract was all he had to hold him over until the funds from the movie materialized.

In 1966, Mike Nichols began casting The Graduate. Negotiations with Warren Beatty and Robert Redford fell through, and Hoffman auditioned for the role. Before Hoffman, Charles Grodin had also been in consideration for the role but, according to one anecdote, refused to work for the amount offered. Hoffman had been set to play the role of Nazi playwright Franz Liebkind in Mel Brooks' 1968 movie The Producers, but dropped out when he landed the role of Benjamin Braddock, opposite Anne Bancroft, Brooks' wife. The film began production in March 1967. Hoffman received an Academy Award nomination for his performance. After the success of this film, another Hoffman film, Madigan's Millions, shot before The Graduate, was released on the tail of the actor's newfound success. It was considered a failure at the box office.

In December 1968 Hoffman returned to Broadway to appear in the title role of Murray Schisgal and John Sebastian's musical Jimmy Shine. For his performance in the production Hoffman won a Drama Desk Award for Outstanding Performance. Just a few weeks after leaving the production, Hoffman's next major film Midnight Cowboy premiered in theatres across the United States on 25 May 1969. For his role as Ratso Rizzo in the film, Hoffman received his second Oscar nomination and the film won the Best Picture honor. This was followed by his role in Little Big Man, where he played Jack Crabb, who ages from teenager to a 121-year-old man in the film. The film was widely praised by critics, but was overlooked for an award except for a supporting nomination for Chief Dan George.

Hoffman continued to appear in major films over the next few years. Who Is Harry Kellerman and Why Is He Saying Those Terrible Things About Me?, Straw Dogs, and Papillon were followed by Lenny in 1974, for which Hoffman received his third nomination for Best Actor in seven years.

Less than two years after the Watergate scandal, Hoffman and Robert Redford starred as Carl Bernstein and Bob Woodward, respectively, in All the President's Men. Hoffman next starred in Marathon Man, a film based on William Goldman's novel of the same name, opposite Laurence Olivier. Hoffman's next roles were not as successful. He opted out of directing Straight Time but starred as a thief. His next film, Michael Apted's Agatha, was opposite Vanessa Redgrave starring as Agatha Christie.

Hoffman's next starred in Robert Benton's Kramer vs. Kramer as workaholic Ted Kramer whose wife unexpectedly leaves him to raise their son alone. Hoffman starred alongside Meryl Streep in the film, which earned Hoffman his first Academy Award. The film also received the Best Picture honor, as well as Supporting Actress (Streep) and Director.

In Tootsie, Hoffman portrays Michael Dorsey, a struggling actor who finds himself dressing up as a woman to land a role on a soap opera. His co-star was Jessica Lange. Tootsie earned ten Academy Award nominations, including Hoffman's fifth nomination.

Hoffman then turned to television in the role of Willy Loman in Death of a Salesman, for which he won the 1985 Emmy Award for Outstanding lead actor in a TV movie or miniseries. He would also go on to win a Golden Globe for the same performance.

Hoffman's largest film failure was Elaine May's Ishtar, with Warren Beatty. The film received almost completely negative reviews from critics and was nominated for three Razzie awards. However, Hoffman and Beatty enjoyed working on the film and tried to defend it. James House, who later became a country music artist, served as Hoffman's vocal coach in the film.[7]

In director Barry Levinson's Rain Man, Hoffman starred as an autistic savant, opposite Tom Cruise. Levinson, Hoffman and Cruise worked for two years on the film, and his performance garnered Hoffman his second Academy Award. Upon accepting, Hoffman stated softly to his fellow nominees that it was okay if they didn't vote for him because "I didn't vote for you guys either." After Rain Man, Hoffman appeared with Sean Connery and Matthew Broderick in Family Business. The film did relatively poorly with the critics and at the box office. In 1991, Hoffman voiced substitute teacher Mr. Bergstrom in the The Simpsons episode "Lisa's Substitute", under the pseudonym Sam Etic. As a reference to this episode, on the episode portraying the Itchy & Scratchy movie, Lisa says that Dustin Hoffman has a cameo but doesn't use his real name.

Throughout the 1990s, Hoffman appeared in many large, studio films, such as Dick Tracy (which reunite both him and his Ishtar co-star Beatty, who played the titular character), Hero and the ill-fated Billy Bathgate (which he co-starred with Nicole Kidman who was nominated for a Golden Globe). Hoffman also played the title role of Captain Hook in Steven Spielberg's Hook, earning a Golden Globe nomination; in this movie, Hoffman's costume was so heavy that he had to wear an air-conditioned suit under it. Hoffman played the lead role in Outbreak, alongside Rene Russo, Kevin Spacey, Morgan Freeman, Cuba Gooding Jr. and Donald Sutherland. Following that, he appeared in Sleepers with Brad Pitt, Jason Patric, and Kevin Bacon. He starred opposite John Travolta in the Costa Gavras vehicle Mad City.

It was in the mid-1990s that Hoffman starred in — and was deeply involved in the production of — David Mamet's American Buffalo, one of the very few "pure art projects" he is known for, and an early effort of film editor Kate Sanford. Hoffman gained his seventh Academy Award nomination for his role in Wag The Dog. He next appeared in Barry Levinson's adaptation of Sphere, opposite Sharon Stone, Samuel L. Jackson, Peter Coyote, Queen Latifah and Liev Schreiber. Hoffman next appeared in Moonlight Mile, followed by Confidence opposite Edward Burns, Andy Garcia and Rachel Weisz. Hoffman would finally have a chance to work with Gene Hackman, in Gary Fleder's Runaway Jury, an adaptation of John Grisham's bestselling novel.

Hoffman co-starred with Barbra Streisand, Robert De Niro and Ben Stiller in 2004's Meet the Fockers, the sequel to Meet the Parents. Hoffman won the 2005 MTV Movie Award for Best Comedic Performance. He was featured in cameo roles in Andy Garcia's The Lost City and on the final episode of HBO sitcom Curb Your Enthusiasm's fifth season. In 2006, Hoffman appeared in Stranger than Fiction, played the perfumer Giuseppe Baldini in Tom Tykwer's film Perfume: The Story of a Murderer and had a cameo in the 2006 film The Holiday.

In 2007, he was featured in an advertising campaign for Australian telecommunications company Telstra's Next G network,[8] appeared in the 50 Cent video "Follow My Lead" as a psychiatrist, and played the title character in the family film Mr. Magorium's Wonder Emporium. In 2008, although he was reluctant to perform in an animated film, Hoffman had a prominent role in the acclaimed film Kung Fu Panda, which was praised in part for his comedic chemistry with Jack Black and his character's complex relationship with the story's villain. He later won the Annie Award for Voice Acting in an Animated Feature for Kung Fu Panda. He next voiced Roscuro in The Tale of Despereaux and played the title character in Last Chance Harvey.

In 1970, Hoffman and Byrne were living in Greenwich Village in a building next door to the townhouse destroyed by members of The Weatherman when they detonated a bomb in the building's basement, killing three people. In the 2002 documentary The Weather Underground, Hoffman can be seen standing in the street during the aftermath of the explosion.[10]

A political liberal, Hoffman has long supported the Democratic Party and Ralph Nader.[11] In 1997, he was one of a number of Hollywood stars and executives to sign an open letter to then-German Chancellor Helmut Kohl, published as a newspaper advertisement in the International Herald Tribune, which protested the treatment of Scientologists in Germany.[12]

Robert Duvall was a roommate of Hoffman's during their struggling actor years in New York City. Duvall and Hoffman tease each other on the matter of acting training, as Duvall was trained by Sanford Meisner whereas Hoffman was brought up on Lee Strasberg's method acting. Hoffman is still good friends with actor Gene Hackman, who was also friends with Duvall during their years as starving actors. His nicknames include Dusty and DHoff.

This article uses material from the article Dustin Hoffman from the free encyclopedia Wikipedia and it is licensed under the GNU Free Documentation License.

Envie d'un manque de problèmes Amandine Bourgeois
Update Required To play the media you will need to either update your browser to a recent version or update your Flash plugin.