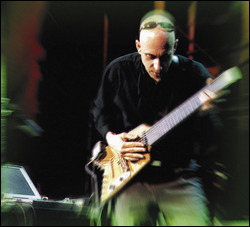 A central figure in the avant-garde and experimental music scene in New York City since the late 1970s,[2][3] Sharp has released over eighty-five recordings ranging from blues, jazz, and orchestral music to noise, no wave rock, and techno music. He pioneered the use of personal computers in live performance with his Virtual Stance project of the 1980s.[4] He has used algorithms and fibonacci numbers in experimental composition [5] since the 1970s.[6] He has cited literature as an inspiration for his music and often favors improvisation.[5] He is an inveterate performer, playing mainly guitar, saxophone and bass clarinet. Sharp has led many ensembles over the years, including the blues-oriented Terraplane and Orchestra Carbon.[7]

Sharp was classically trained in piano from an early age, taking up clarinet and guitar as a teen. He attended Cornell University from 1969 to 1971, studying anthropology, music, and electronics. He completed his B.A. degree at Bard College in 1973, where he studied composition with Benjamin Boretz and Elie Yarden; jazz composition, improvisation, and ethnomusicology with trombonist Roswell Rudd; and physics and electronics with Burton Brody. In 1977 he received an M.A. from the University at Buffalo, where he studied composition with Morton Feldman and Lejaren Hiller, and ethnomusicology with Charles Keil.[8]

From the late 1970s, Sharp established himself in New York's music scene. His compositions have been performed by the hr-Sinfonieorchester, the Ensemble Modern, Continuum, the Orchestra of the SEM Ensemble, Kronos Quartet, the FLUX Quartet, Zeitkratzer, the Soldier String Quartet, the JACK Quartet, and the Quintet of the Americas. His work has been featured at festivals worldwide, including the 2008 New Music Stockholm festival, the 2007 Hessischer Rundfunk Klangbiennale, and the Venice Biennale 2003 and 2006. He releases music under his own label (zOaR music) as well as punk label SST and downtown music labels such as Knitting Factory records and John Zorn's Tzadik label. Guitar Player magazine's 30th anniversary issue included Sharp among their list of "The Dirty Thirty - Pioneers and Trailblazers".

Sharp has composed scores for feature films and documentaries;[11] created music and sound-design for The Sundance Channel, MTV and Bravo networks; and has presented numerous sound installations in art galleries and museums.

He is the subject of Bert Shapiro's documentary Elliott Sharp: Doing the Don't, for Pheasant Eye Film.[12] He was a 2009 Master Artist-in-Residence at the Atlantic Center for the Arts, and a 2010 New York Foundation for the Arts Fellow in music. In 2003 he was awarded a grant from the Foundation for Contemporary Arts Grants to Artists Award.[13] In March 2011, Sharp's 60th birthday was celebrated with a weekend of all-star concert events entitled "E#@60", hosted by Brooklyn's ISSUE Project Room.[14]

As a compilation producer

This article uses material from the article Elliott Sharp from the free encyclopedia Wikipedia and it is licensed under the GNU Free Documentation License.

Dans la vie Marie & Claire
Update Required To play the media you will need to either update your browser to a recent version or update your Flash plugin.