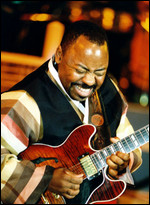 Paul Milton Jackson Jr. (born December 30, 1959)[1] is an American fusion/urban jazz composer, arranger, producer and guitarist. He was born and raised in Los Angeles. Jackson knew by the age of fifteen that he wanted to become a professional musician. He attended the University of Southern California, majoring in music.

In addition to being a recording artist in his own right, Jackson is also highly accomplished L.A. session player, with a career spanning multiple decades. He has supported artists ranging from Michael Jackson (no relation)[2] (on the albums Thriller, Bad, Dangerous, HIStory and Blood on the Dance Floor: HIStory in the Mix) to the Temptations, Whitney Houston,[2] Alexander O'Neal, Five Star (on the album Silk and Steel), Howard Hewett, Thomas Anders, Patti LaBelle and Luis Miguel, to rockers such as Chicago and Elton John, to jazz-oriented players such as George Duke, George Benson, Dave Koz, Al Jarreau, David Benoit, Marcus Miller and Kirk Whalum, and to Christian artists such as Leon Patillo and Don Moen.

In 2013 it was revealed he contributed to several tracks on the album, Random Access Memories by Daft Punk and UK based singer songwriter Birdy's second album "Fire Within." He also played guitar on Lisa Stansfield's 2014 album, Seven.

Jackson can be seen playing guitar in a wide variety of styles on The Tonight Show With Jay Leno and American Idol.[3]

This article uses material from the article Paul Jackson, Jr. from the free encyclopedia Wikipedia and it is licensed under the GNU Free Documentation License.

Sweet Harmony Beloved
Update Required To play the media you will need to either update your browser to a recent version or update your Flash plugin.