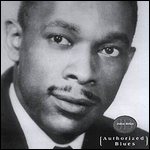 John Brim (April 10, 1922 October 1, 2003) was an American Chicago blues guitarist, songwriter and singer. He wrote and recorded the original "Ice Cream Man", which was later covered by Van Halen on their first album.[1] The song was also covered by Martin Sexton on his 2001 double album Live Wide Open. David Lee Roth's version appears on his album Diamond Dave. Brim died of heart cancer on October 1, 2003.

Brim began playing guitar by studying the recordings of Big Bill Broonzy and Tampa Red. He moved to Indianapolis in 1941 and Chicago in 1947. His wife Grace was also a talented musician who played drums and harmonica.[1]

Brim recorded for several labels, including releases on Chess Records. "Ice Cream Man" was produced in 1953 but was not released until 1969. Other tracks recorded on the Chess label include "I Would Hate to See You Go" (1956). The album "Whose Muddy Shoes" includes all his songs from the 1950s on that label.[1]

Brim also operated a dry cleaners and a record store. He used his royalties from Van Halens recording of "Ice Cream Man" to open a nightclub in Chicago.[2]

Brim continued to perform occasionally around Chicago, and was a regularly featured performer on the Chicago Blues Festival beginning in 1991, when he was backed by the local Chicago blues band The Ice Cream Men (drummer Steve Cushing, guitarists Dave Waldman and "Rockin'" Johnny Burgin, and harmonica player Scott Dirks). The band name was coincidental; they were not Brim's regular band, but had been using that name because the members had previously worked with Chicago bluesman Otis "Big Smokey" Smothers, who worked as an ice cream man on Chicago's south side.

He recorded four songs for the German Wolf label in 1989. A CD titled Ice Cream Man was released on Tone Cool Records in 1994.[3] It received a W. C. Handy nomination as the best Traditional Blues Album of the Year.[2]

Brim appeared at the 1997 San Francisco Blues Festival. He made another album in 2000, and continued to give live performances, such as in Belgium in 2001 and at the 2002 Chicago Blues Festival.[2]

On the morning of October 1, 2003, Brim awoke and talked on the phone with his son, before he was struck with chest pains. Brim was rushed to the hospital, but died just before the ambulance reached the hospital, and the cause of death was later determined to have been heart cancer. Brim's funeral was held on October 10, 2003.

This article uses material from the article John Brim from the free encyclopedia Wikipedia and it is licensed under the GNU Free Documentation License.