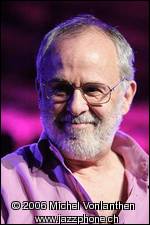 Robert McElhiney "Bob" James (born December 25, 1939) is a two-time Grammy Award-winning smooth jazz keyboardist, arranger and producer. He is recognized as one of the original founders of smooth jazz, is renowned for the complexity of his arrangements and instrumentals, and his work is frequently sampled.

James was born on Christmas Day, 1939 in Marshall, Missouri. His parents were Albert Lamkin "Buddy" James and Alice McElhiney. He also has an older sister named Katherine (Katie). James started playing the piano at the early age of 4. His first piano teacher, Sister Mary Elizabeth, who taught at Mercy Academy, a local Catholic school, discovered that he had perfect pitch. At age seven, James began to study with Mrs. R. T. Dufford, a teacher at Missouri Valley College. He credited her as 'an excellent teacher who also taught fundamentals of theory and harmony". His first professional music job was when he was approximately 8 years old when he played for a tap dance class at Mercy Academy. "As I recall, I was paid 25 cents, but was eventually let go because my inability to keep the beat over the noise of the tapping"

At age 15, James continued his studies with Franklin Launer, a teacher at Christian College in Columbia, Missouri with more music instruction during high school from Harold Lickey, conductor of the Marshall High School Band & Orchestra. Apart from the piano, James can also play trumpet, timpani and percussion.

From 1950 to 1956, James competed at the Missouri State Fair piano competitions and walked away with several Blue Ribbons. He remembered that cows were being judged at adjacent buildings. Other early jobs included being a member of the Earle Parsons Dance Band (circa 1952- 1955) which played various engagements around the Marshall area. It was during this time that he penned his first dance band arrangement, Once in a While.

During the summer of 1955, at Lake of the Ozarks, Missouri, James played for dancing and occasional jam sessions with the Bob Falkenhainer quartet on the Governor McClurg Excursion Boat in the evenings. He recalls that during the day we had free time and I became a proficient water-skier that summer!

At age 16, a solo engagement followed in the summer when James traveled with good friend Ben Swinger to Colorado and ended up with a job in the Piano Bar at the Steads Ranch resort, in Estes Park. A year later, he attended the University of Michigan and began his journey towards receiving his Bachelor's and his Master's degree in Music. During the first semester of his sophomore year, James transferred to Berklee College of Music, in Boston, Massachusetts. James's roommate was Nick Brignola, who has become one of the great baritone sax jazz artists. (The following summer found the two of them working together at a jazz club in Albany, New York when James joined the Nick Brignola Quartet.) "The first original composition of mine to be recorded, 'Blue Beau', was included on an album produced by the Berklee School in 1958-59 and performed by the Berklee School big band, which included Charlie Mariano on alto saxophone." He returned to the University of Michigan for the second semester of his sophomore year.

While playing piano in the orchestra of a campus production of "Carousel", James met two people who have since figured prominently in his life; Judy Heric, who was playing the role of Carrie Pipperidge, & Jack O'Brien, who was Mr. Snow. James dated Heric throughout the remainder of his time at University of Michigan until they were married in September 1963.

In 1962, James began recording a bop-ish trio set for Mercury. After a period with Sarah Vaughan (1965-1968), James became a studio musician.

During the 1970s, James played a major role in establishing the smooth jazz genre, appearing with Stanley Turrentine and Milt Jackson on the 1972 album Cherry and with Turrentine on his following album Don't Mess with Mister T. (1973), and that same year was arranging and working as a producer for CTI Records. James was closely associated with Grover Washington, Jr. during Washington's pioneering years at CTI, arranging Washington's albums Inner City Blues (1972), All the King's Horses (1972), Soul Box (1973), Mister Magic (1975), and Feels So Good (1975).

In 1974, James recorded One, his first purely commercial effort as a leader. He later made big-selling albums for his own Tappan Zee label, Columbia, and Warner Bros., including collaborations with Earl Klugh and David Sanborn. James produced Maynard Ferguson's 1975 album Primal Scream and executive produced Ferguson's highly-successful 1976 album Conquistador. "Angela", the 1978 instrumental theme from the sitcom Taxi, is probably James' most well-known work to date. He is also well known for the smooth jazz classics "Nautilus" and "Westchester Lady", the latter from the album Three. In the Philippines, his biggest solo hit was "Sign Of The Times" which was culled from his 1981 album of the same name.

For their first joint album release in late 1979, One on One, Earl Klugh and James received a Grammy award for Best Pop Instrumental Performance of 1981. James is the founding member of contemporary jazz supergroup Fourplay.

In 1979, Bob James' artistic director Peter Paul came up with a suggestion for Bob to take his music on the road playing venues in New York. With Bob's work heavily emphasizing much of the New York contemporary jazz scene, this seemed an excellent idea. It was a busy time as Bob's own record label, Tappen Zee, was in its infancy. Also Bob was working with Earl Klugh on the One on One sessions. However, not to be deterred, the live-on-the-road-venture started to be planned and venues were booked. The result was a series of concerts in December 1979 backed up by a full marketing campaign including posters featuring Bob at the wheel of a New York yellow cab - the irony being that his most commercial hit and most radio played recording was Angela (The Theme from the hit TV series "Taxi" starring Danny DeVito). The campaign and subsequent radio slots throughout New York led to venues being sold out.

In the Autumn of 1980 Bob James released, on Tappen Zee, the live double-album All Around The Town which featured the best recordings from the December '79 shows made at three of the venues namely Bottom Line, Town Hall and Carnegie Hall. Among the musicians touring with Bob were Earl Klugh, Steve Gadd, Gary King, Richard Tee and Tom Browne. With the original vinyl double-album becoming collectible and being deleted in the 1990s, in 1996 a CD version of the album was released. By the summer of 2013, the single CD version was starting to become rare especially in the UK. The original Live double album and subsequent single CD consisted of Touchdown (6:43), We're All Alone (11:59), Farandole (10:03), and Kari (5:54) all recorded on 22 December 1979 at Carnegie Hall; Stompin' At The Savoy (11:39) and The Golden Apple (10:13) recorded on 21 December 1979 at Town Hall; and Angela (7:21) and Westchester Lady (8:36) both recorded on 18 December and 19 December 1979 respectively at Bottom Line. The recordings were produced by Joe Jorgensen and Peter Paul with Bob himself undertaking all the on-stage arrangements and conducting. Other recordings are likely to exist from the live shows and fans await a new remastered edition of the album with additional material. For the original album and CD release, Marion Orr's excellent sleeve notes dated September 1980 were included and the album cover was a copy of the promotional poster used throughout New York City.

James is recognized as one of the progenitors of smooth jazz. His music has also been sampled often in hip hop music. Two of James' songs "Nautilus" from 1974's One and "Take Me to the Mardi Gras" from 1975's Two are among the most sampled in hip hop history. "Nautilus" has been most famously sampled in Eric B. & Rakim's "Let The Rhythm Hit 'em", Run-D.M.C.'s "Beats to the Rhyme", Ghostface Killah's "Daytona 500", Soul II Soul's "Jazzie's Groove" and Jeru the Damaja's "My Mind Spray" amongst many others and the notes of "Nautilus'" bassline were played on a keyboard for Slick Rick's "Children's Story". According to whosampled.com, "Nautilus" and "Take Me to Mardi Gras" have been sampled in thirty-two and forty-three hip-hop recordings, respectively. The song, "Take Me to the Mardi Gras" (written by Paul Simon) incorporates in its first four measures a bell and drum groove that is one of hip hop's fundamental breakbeats. Crash Crew's "Breaking Bells (Take Me To The Mardi Gras)", Run-D.M.C.'s "Peter Piper", LL Cool J's "Rock the Bells", the Beastie Boys' "Hold it Now, Hit it", Missy Elliott's "Work It," will.i.am's "I Got it from my Mama," "This Is Me (Urban Remix)" by girl group Dream for their debut album It Was All a Dream, "I Want You" from Common's Finding Forever, and most recently "Take It Back" from Wu-Tang Clan's 8 Diagrams.

Röyksopp sampled his version of the Stylistics song "You're as Right as Rain" for their instrumental track "Eple." The title track from his 1981 album Sign of the Times was sampled in De La Soul's "Keepin' the Faith", and Warren G's "Regulate". In addition, James is mentioned in a verse by André 3000 on "Black Ice" from Goodie Mob's second album Still Standing.

His "Angela" was sampled in the track "Cab Fare" by Souls of Mischief, an out-take from their album No Man's Land.

The track "El Verano" from the 1977 album "BJ4" is used as a sample in the song "Blown Away" by the Cocoa Brovaz and also in the Masta Ace Track "NY Confidential".

One's "Night on Bald Mountain" is used in the video game God Hand, and forms the soundtrack to a level of the same name.

N.W.A's "Alwayz Into Somethin'" and New Edition's "Hit Me Off" uses a sample of "Storm King" from the album Three.

"The Rhythm" by Kwamé the Boy Genius features a sample of "Look-Alike" from the album Lucky Seven.

"Can't Wait" by Redman features a sample of "Caribbean Nights" from the album Touchdown.

"MC's Smoke Crack" by Edan features a sample of "Look-Alike" from the album Lucky Seven.

"Sign" by Coldcut features a sample of "I Feel A Song (In My Heart)" from the album Two.

"Pure Pleasure" by DJ Cam features a sample of "Nautilus" from the album One.

With Jackie and Roy

This article uses material from the article Bob James (musician) from the free encyclopedia Wikipedia and it is licensed under the GNU Free Documentation License.