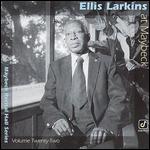 Ellis Larkins (May 15, 1923 – September 30, 2002) was an African-American jazz pianist born in Baltimore, Maryland, perhaps best known for his two recordings with Ella Fitzgerald, the albums Ella Sings Gershwin (1950) and Songs in a Mellow Mood (1954).[1] He was also the leader in the first solo sides by singer Chris Connor on her album Chris (1954).

Larkins was the first African American to attend the Peabody Conservatory of Music, a well-known institute in Baltimore. He began his professional playing career in New York City after moving there to attend the Juilliard School. Following school Larkins performed jazz piano with Billy Moore and Edmond Hall. He recorded with Coleman Hawkins, Mildred Bailey, and Dicky Wells in the 1940s. In the 1950s he recorded with Ella Fitzgerald, Ruby Braff, and Beverly Kenney. His 1960s work included recordings or performances with Eartha Kitt, Joe Williams, Helen Humes, Georgia Gibbs and Harry Belafonte.

Though he was best known as an accompanist, Larkins recorded several solo albums in the 1950s. In the 1970s he performed regularly at several New York venues, including Gregory's, a small bar in the east 70s. Traditional jazz fans regard him as one of the most lyrical and romantic pianists in jazz history, next to Jimmy Jones.

Ellis Larkins played on three tracks with Ella Fitzgerald on her "Ella Fitzgerald Newport Jazz Festival Live At Carnegie Hall" July 5, 1973 The tracks recorded were "You Turned The Tables On Me", "Nice Work If You Can Get It" and "I've Got A Crush On You"

This article uses material from the article Ellis Larkins from the free encyclopedia Wikipedia and it is licensed under the GNU Free Documentation License.

Don't Leave Me Now Supertramp
Update Required To play the media you will need to either update your browser to a recent version or update your Flash plugin.