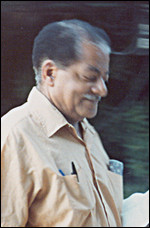 Theodore Shaw Wilson (November 24, 1912 – July 31, 1986)[1] was an American jazz pianist. Described by critic Scott Yanow as "the definitive swing pianist",[2] Wilson's sophisticated and elegant style was featured on the records of many of the biggest names in jazz, including Louis Armstrong, Lena Horne, Benny Goodman, Billie Holiday, and Ella Fitzgerald. With Goodman, he was one of the first black musicians to appear prominently with white musicians. In addition to his extensive work as a sideman, Wilson also led his own groups and recording sessions from the late 1920s to the 1980s.

Wilson was born in Austin, Texas, on November 24, 1912. He studied piano and violin at Tuskegee Institute in Tuskegee, Alabama. After working in Speed Webb's band, with Louis Armstrong, and also understudying Earl Hines in Hines's Grand Terrace Cafe Orchestra, Wilson joined Benny Carter's Chocolate Dandies in 1933. In 1935, he joined the Benny Goodman Trio (which consisted of Goodman, Wilson and drummer Gene Krupa, later expanded to the Benny Goodman Quartet with the addition of Lionel Hampton). The trio performed during the big band's intermissions. By joining the trio, Wilson became one of the first black musicians to perform prominently in a racially integrated group.

Jazz producer and writer John Hammond was instrumental in getting Wilson a contract with Brunswick, starting in 1935, to record hot swing arrangements of the popular songs of the day, with the growing jukebox trade in mind. He recorded fifty hit records with various singers such as Lena Horne, Helen Ward and Billie Holiday, including many of Holiday's greatest successes. During these years, he also took part in many highly regarded sessions with a wide range of important swing musicians such as Lester Young, Roy Eldridge, Charlie Shavers, Red Norvo, Buck Clayton, Sarah Vaughan and Ben Webster. From 1936 to 1942 he recorded for Brunswick Records and Columbia Records. In the 1950s he recorded on Verve Records.

Wilson formed his own short-lived big band in 1939, then led a sextet at Café Society from 1940 to 1944. He was dubbed the "Marxist Mozart" by Howard "Stretch" Johnson due to his support for left-wing causes: he performed in benefit concerts for The New Masses journal and for Russian War Relief, and he chaired the Artists' Committee to elect Benjamin J. Davis (a New York City council member running on the Communist Party USA ballot line).[3] In the 1950s, Wilson taught at the Juilliard School. Wilson can be seen appearing as himself in the 1955 motion picture The Benny Goodman Story. He also worked as music director for the Dick Cavett Show.

Wilson lived quietly in suburban Hillsdale, New Jersey.[4] He was married three times, including to the songwriter Irene Kitchings. He performed as a soloist and with pick-up groups until the final years of his life, including leading a trio with his sons Theodore Wilson on bass and Steven Wilson on drums.[5]

In 1979, Wilson was awarded an Honorary Doctorate of Music from Berklee College of Music. [6]

Wilson died in New Britain, Connecticut, on July 31, 1986; he was 73. He is buried at Fairview Cemetery in New Britain. In addition to Theodore and Steven, Wilson had three more children, William, James (Jim) and Dune.[7]

This article uses material from the article Teddy Wilson from the free encyclopedia Wikipedia and it is licensed under the GNU Free Documentation License.