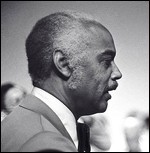 Ellington was born in Washington, DC, the son of the composer, pianist, and bandleader Duke Ellington and Edna Thompson. By the age of eighteen he had written his first piece to be recorded by his father ("Pigeons and Peppers"). He attended New College for the Education of Teachers at Columbia University, New York University and The Juilliard School.

In 1939, 1946–1949, and 1959 he led his own bands, many of whose members went on to play with his father, or to achieve independent fame (notably Dizzy Gillespie, Kenny Dorham, Idrees Sulieman, Chico Hamilton, Charles Mingus, and Carmen McRae). During the 1940s in particular he wrote pieces that became standards, including "Things Ain't What They Used to Be", "Jumpin' Punkins", "Moon Mist", and "Blue Serge". He also wrote the lyrics to Hillis Walters' popular song, "Pass Me By" (1946), which was recorded by Lena Horne, Carmen McRae and Peggy Lee.

When his father died in 1974, Ellington took over the orchestra, taking it on tour to Europe in 1975 and 1977 (his own son, Edward Ellington, played in the band in the late 1970s, and his other son, Paul Mercer Ellington, took it over at a later date). Ellington also has a daughter Mercedes Ellington.

Ellington died of a heart attack a month short of his seventy-seventh birthday.[1]

This article uses material from the article Mercer Ellington from the free encyclopedia Wikipedia and it is licensed under the GNU Free Documentation License.

Shadow Marc Salvador
Update Required To play the media you will need to either update your browser to a recent version or update your Flash plugin.