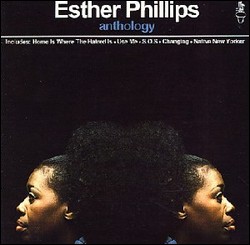 She was born Esther Mae Jones in Galveston, Texas. Her parents divorced when she was an adolescent, and she divided her time between her father, in Houston, and her mother, in the Watts section of Los Angeles. She was brought up singing in church and was reluctant to enter a talent contest at a local blues club, but her sister insisted. A mature singer at the age of 14, she won the amateur talent contest in 1949 at the Barrelhouse Club, owned by Johnny Otis. Otis was so impressed that he recorded her for Modern Records and added her to his traveling revue, the California Rhythm and Blues Caravan, billed as Little Esther. She later took the surname Phillips, reportedly inspired by a sign at a gas station.[3]

Her first hit record was "Double Crossing Blues", with the Johnny Otis Quintette and the Robins (a vocal group), released in 1950 by Savoy Records, which reached number 1 on the Billboard R&B chart. She made several hit records for Savoy with the Johnny Otis Orchestra, including "Mistrusting Blues" (a duet with Mel Walker) and "Cupid's Boogie", both of which also went to number 1 that year. Four more of her records made the Top 10 in the same year: "Misery" (number 9), "Deceivin' Blues" (number 4), "Wedding Boogie" (number 6), and "Far Away Blues (Xmas Blues)" (number 6). Few female artists performing in any genre had such success in their debut year.[2]

Phillips left Otis and the Savoy label at the end of 1950 and signed with Federal Records. But just as quickly as the hits had started, they stopped. She recorded more than thirty sides for Federal, but only one, "Ring-a-Ding-Doo", made the charts, reaching number 8 in 1952. Not working with Otis was part of her problem; the other part was her deepening dependence on heroin, to which she was addicted by the middle of the decade.[4] Being in the same room when Johnny Ace shot himself (accidentally) on Christmas Day, 1954, while in-between shows in Houston, presumably did not help matters.

In 1954, she returned to Houston to live with her father and recuperate. Short on money, she worked in small nightclubs around the South, punctuated by periodic hospital stays in Lexington, Kentucky, to treat her addiction. In 1962, Kenny Rogers discovered her singing at a Houston club and helped her get a contract with Lenox Records, owned by his brother Lelan.

Phillips eventually recovered enough to launch a comeback in 1962. Now billed as Esther Phillips instead of Little Esther, she recorded a country tune, "Release Me", with the producer Bob Gans. This went to number 1 on the R&B chart and number 8 on the pop chart. After several other minor R&B hits for Lenox, she was signed by Atlantic Records. Her cover of the Beatles' song "And I Love Him" nearly made the R&B Top 10 in 1965. The Beatles flew her to the UK for her first overseas performances.[5]

She had other hits in the 1960s for Atlantic, such as the critically acclaimed Jimmy Radcliffe song "Try Me", which featured a saxophone part by King Curtis (and is often mistakenly credited as the James Brown song of the same title), but she had no more chart-toppers. Her heroin dependence worsened, and she checked into a rehabilitation facility. There she met the singer Sam Fletcher. While undergoing treatment, she recorded some sides for Roulette in 1969, mostly produced by Lelan Rogers. On her release, she moved back to Los Angeles and re-signed with Atlantic. Her friendship with Fletcher resulted in a performance engagement at Freddie Jett's Pied Piper club in late 1969, which produced the album Burnin'. She performed with the Johnny Otis Show at the Monterey Jazz Festival in 1970.

One of her biggest post-1950s triumphs was her first album for Kudu Records, From a Whisper to a Scream, in 1972. The lead track, "Home Is Where the Hatred Is", an account of drug use written by Gil Scott-Heron, was nominated for a Grammy Award. Phillips lost to Aretha Franklin, but Franklin presented the trophy to her, saying she should have won it instead.[6]

In 1975, she released a disco-style update of Dinah Washington's "What a Diff'rence a Day Makes", her biggest hit single since "Release Me". It reached the Top 20 in the United States and the Top 10 in the UK Singles Chart.[7] On November 8, 1975, she performed the song on an episode of NBC's Saturday Night (later called Saturday Night Live) hosted by Candice Bergen. The accompanying album of the same name became her biggest seller yet, with arranger Joe Beck on guitar, Michael Brecker on tenor sax, David Sanborn on alto sax, Randy Brecker on trumpet, Steve Khan on guitar and Don Grolnick on keyboards.

She continued to record and perform throughout the 1970s and early 1980s, completing seven albums for Kudu and four for Mercury Records, which signed her in 1977. In 1983, she charted for the final time with "Turn Me Out", recorded for Muse, a small independent label, which reached number 85 on the R&B chart. She completed recording her final album a few months before her death; it was released by Muse in 1986.

Phillips died at UCLA Medical Center in Carson, California, in 1984, at the age of 48, from liver and kidney failure due to long-term drug abuse.[8] Her funeral services were conducted by Johnny Otis.[6] Originally buried in an unmarked pauper's grave at Lincoln Memorial Park in Compton,[9] she was reinterred in 1985 in the Morning Light section at Forest Lawn Memorial Park, Hollywood Hills, in Los Angeles. A bronze marker recognizes her career achievements and quotes a Bible passage: "In My Father's House Are Many Mansions" (John 14:2).

Notes: *With the Johnny Otis Orchestra. **With Big Al Downing. ***"What a Diff'rence a Day Makes" also reached number 2 on the US Dance chart. Another two-sided single, "Magic's In the Air" / "Boy I Really Tied One On", peaked at number 5 on the same chart in 1976.

Taken from the original logbooks of the defunct Federal Records, which I copied decades ago.I?

This article uses material from the article Esther Phillips from the free encyclopedia Wikipedia and it is licensed under the GNU Free Documentation License.

Il jouait du piano debout France Gall
Update Required To play the media you will need to either update your browser to a recent version or update your Flash plugin.