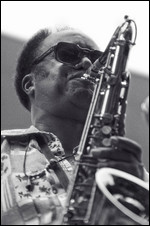 Wilkins was born in St. Louis, Missouri. In his early career he played in a military band, before joining Earl Hines's last big band. He worked with Count Basie from 1951 to 1955, eventually leaving to work free-lance as a jazz arranger and songwriter. His success declined in the 1960s, but revived after work with Clark Terry, leading to a tour of Europe.

Eventually Wilkins settled in Copenhagen, Denmark, where he would live for the rest of his life.[2] There he formed the Almost Big Band so he could write for a band of his own formation. The idea was partly inspired by his wife Jenny. Copenhagen had a thriving jazz scene with several promising jazz musicians as well as a well-established community of expatriate American jazz musicians which had formed in the 1950s and now included representatives like Kenny Drew and Ed Thigpen who joined the band along with Danish saxophonist Jesper Thilo. The band released four albums, but after 1991 he became too ill to do much with it.[3] He died in Copenhagen.

With Sarah Vaughan and the Count Basie Orchestra

This article uses material from the article Ernie Wilkins from the free encyclopedia Wikipedia and it is licensed under the GNU Free Documentation License.

Bonne Idée Jean-Jacques Goldman
Update Required To play the media you will need to either update your browser to a recent version or update your Flash plugin.