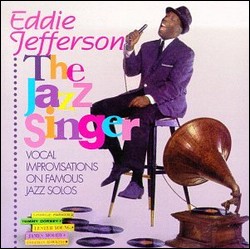 Eddie Jefferson (August 3, 1918 – May 9, 1979) was a jazz vocalist and lyricist. He is credited as an innovator of vocalese, a musical style in which lyrics are set to an instrumental composition or solo. Jefferson himself claims that his main influence was Leo Watson. Perhaps his best-known song is "Moody's Mood for Love", though it was first recorded by King Pleasure, who cited Jefferson as an influence. Jefferson's songs "Parker's Mood" and "Filthy McNasty" were also hits.[1]

Jefferson was born in Pittsburgh, Pennsylvania.[2] One of his most notable recordings, "So What", combined the lyrics of artist Christopher Acemandese Hall with the music of Miles Davis to highlight his skills, and enabled him to turn a phrase, into his style he calls jazz vocalese.

Jefferson's last recorded performance was at the Joe Segal's Jazz Showcase in Chicago and was released on video by Rhapsody Films. He shared the stand with Richie Cole (alto sax), John Campbell (piano), Kelly Sill (bass) and Joel Spencer (drums). The performance was part of a tour that Jefferson and Cole led together. Their opening night in Detroit, Michigan, was at Baker's Keyboard Lounge, a jazz club built in the 1930s that has played host to famous musicians including musicians who spanned the genre with artists as diverse as Dexter Gordon and Sonny Stitt.

A previously unreleased live recording from July 1976 was released in August 2009 as, Eddie Jefferson At Ali's Alley, with the quintet of drummer Rashied Ali featured.

Eddie Jefferson was shot and killed at Baker's Keyboard Lounge on May 8, 1979, aged 60. He had left the club with fellow bandleader Cole around 1:35 a.m. and was shot while walking out of the building. A late-model Lincoln Continental was spotted speeding away from the scene. The driver was later picked up by Detroit police and identified as a disgruntled dancer with whom Jefferson once worked and had fired from a gig. The suspect was charged with murder, but was later acquitted in a Detroit criminal trial.

The Manhattan Transfer honored both Jefferson and Coleman Hawkins in their vocal version of "Body and Soul" on their album Extensions in 1979.

This article uses material from the article Eddie Jefferson from the free encyclopedia Wikipedia and it is licensed under the GNU Free Documentation License.