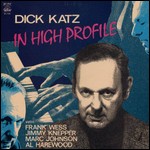 Dick Katz (March 13, 1924[1] November 10, 2009[2]) was an American jazz pianist, arranger and producer. He freelanced throughout much of his career, and worked in a number of ensembles. He co-founded Milestone Records in 1966 with Orrin Keepnews.

He studied at the Peabody Institute, the Manhattan School of Music, and Juilliard. He also took piano lessons from Teddy Wilson. In the 1950s, he joined the house rhythm section of the Café Bohemia, and worked in the groups of Ben Webster and Kenny Dorham, Oscar Pettiford, and, later, Carmen McRae. From 1954 to 1955, he was part of the J. J. Johnson/Kai Winding Quintet. He also worked in Orchestra USA and participated on Benny Carter's Further Definitions album, and worked on some of Helen Merrill's recordings. In the late 60s, he played with Roy Eldridge and Lee Konitz. In the 1990s, he worked as a pianist and arranger with the American Jazz Orchestra and Loren Schoenberg's big band.

Will Friedwald called Katz "a keyboardist of uncommon sensitivity and harmonic acumen."[3] He was the favorite pianist of Benny Carter and Coleman Hawkins, as well as vocalists Carmen McRae and Helen Merrill.[4]

This article uses material from the article Dick Katz from the free encyclopedia Wikipedia and it is licensed under the GNU Free Documentation License.

I Love The Nightlife Alicia Bridges
Update Required To play the media you will need to either update your browser to a recent version or update your Flash plugin.