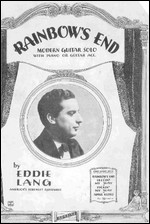 Eddie Lang (born Salvatore Massaro, October 25, 1902 – March 26, 1933) is known as the father of jazz guitar.[1] During the 1920s, he gave the guitar a prominence it previously lacked as a solo instrument, as part of a band or orchestra, and as accompaniment for vocalists.[2] He recorded duets with guitarists Lonnie Johnson and Carl Kress, with jazz violinist Joe Venuti, and played rhythm guitar in the big bands of Paul Whiteman and Bing Crosby.

The son of an Italian-American instrument maker, Lang was born in Philadelphia, Pennsylvania,[3][4] and grew up with violinist Joe Venuti. His first instrument was violin when he was seven. He performed on violin in 1917 and became a member of a trio. In 1920, he dropped the violin for banjo and worked with Charlie Kerr, then Bert Estlow, Vic D'Ippolito, and Billy Lustig's Scranton Siren Orchestra. A few years later, he dropped the banjo for guitar when he became a member of the Mound City Blue Blowers led by Red McKenzie.[5] He recorded one of the first solos in 1924 on "Deep 2nd Street Blues".[4] His performances with McKenzie's band drew attention, and he found many jobs as a freelance guitarist.[5] Before Lang, the guitar hadn't been a prominent instrument in jazz bands and dance orchestras.[4]

In 1929, Lang and Venuti became members of the Paul Whiteman Orchestra, and again Lang made an impact. Whiteman was impressed by his ability to learn songs quickly, though Lang had little education and couldn't read music. During the same year, vocalist Bing Crosby made his first solo recordings. His guitarist was Snoozer Quinn, but for the second session he invited Lang. Their friendship grew when Crosby joined the Whiteman Orchestra on its trip west to Hollywood to make the movie King of Jazz, in which Lang and Venuti appeared. In 1930, when Crosby was looking for a job in radio, he insisted on having Lang as his accompaniment. Aside from his friendship with Crosby, he had experience accompanying vocalists, such as Rube Bloom. When Crosby toured soon after, Lang sat on a stool next to him to share the microphone. Lang's wife Kitty, a Ziegfeld girl, was friends with Crosby's wife, Dixie.[4] He became a regular in Crosby's orchestra in 1932, the same year he appeared in the movie The Big Broadcast (1932).[2]

Lang suffered from occasional laryngitis, chronic sore throat, and digestion problems. After a doctor recommended a tonsillectomy, Crosby urged Lang to have the operation.[4][7] Assured that the operation was routine, Lang entered Park West Hospital in Manhattan, but he never awoke from the surgery. He died at the age of thirty in 1933.[4][8] The cause of his death is uncertain.[7][8]

Lang was the first single-string soloist. He played the melody on one string while adding occasional chords. He demonstrated that the guitar could be an instrument for accompaniment like the piano.[4]

While most bands of the time had a banjo player (the banjo being louder than the guitars of the time), Lang was skilled enough to make his acoustic guitar heard in the mix. He was so influential that, according to George Van Eps, banjo players had no choice but to switch to guitar.[6] Van Eps said, "It's very fair to call Eddie Lang the father of jazz guitar." Barney Kessel: "Eddie Lang first elevated the guitar and made it artistic in jazz." Les Paul: "Eddie Lang was the first and had a very modern technique." Joe Pass, in a 1976 interview, stated that Lang was one of the three main guitar innovators, with Wes Montgomery and Django Reinhardt.

On October 23, 2016, Philadelphia's Mural Arts organization dedicated the mural Eddie Lang: The Father of Jazz Guitar, by artist Jared Bader. The mural stands by Lang's childhood home and the James Campbell School that stood at 8th and Fitzwater where Lang learned to play.[11] The mural was championed by area guitarist Richard Barnes, who started "Eddie Lang Day in Philadelphia" in 2010, an annual charity event.[12]

This article uses material from the article Eddie Lang from the free encyclopedia Wikipedia and it is licensed under the GNU Free Documentation License.

My Life Billy Joel
Update Required To play the media you will need to either update your browser to a recent version or update your Flash plugin.