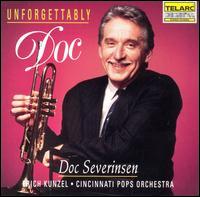 Severinsen was born in Arlington, Oregon, the son of Minnie Mae Severinsen (1897–1998) and Carl Severinsen (1898–1972).[1] He was nicknamed Doc after his father, the only dentist in Arlington. His father played violin and wanted him to play, too, but Severinsen wanted to play trombone.[2] Because his arms weren't long enough for trombone, he settled for cornet. A neighbor gave him some help on how to play, while his father, tobacco in mouth, instructed him to spit out the notes like spitting tobacco. His mother threatened to spank him if he didn't practice.[3]

Severinsen proved to have a knack for the instrument. He was in a high school band when he was seven, and two years later he won a state trumpet contest. At thirteen, he joined a multi-state all-star band, and at fourteen he auditioned for Tommy Dorsey but wasn't hired. He started a quartet called the Blue Notes that performed at local dances.[3]

Before graduating from high school, he was hired to go on the road with the Ted Fio Rito Orchestra.[3] After he graduated, he went on tour with Charlie Barnet, Tommy Dorsey, and Benny Goodman.[2] He was drafted by the Army during World War II.[4] In 1946, he played trumpet on radio station KODL.[5]

In 1949, Severinsen got a job as a studio musician for NBC, where he accompanied Steve Allen, Eddie Fisher, Dinah Shore, and Kate Smith.[3] The leader of The Tonight Show band, Skitch Henderson, asked him to be first chair trumpeter in 1962, and five years later Severinsen was leading the band.[4]

Under Severinsen's direction, the Tonight Show band became a well-known big band in America.[6] Severinsen became one of the most popular bandleaders, appearing almost every night on television. He led the band during commercials and while guests were introduced. He joked with Johnny Carson, the show's host, and got a reputation for gaudy clothing.[2]

The show introduced a comic "Stump the Band" segment in which audience members called out the titles of obscure songs to see if the band knew how to play them. Severinsen often cried "key of E", his signal for the band to strike up a western theme, and then he would enthusiastically sing a country music-flavored nonsense song.

Severinsen substituted for Ed McMahon as Carson's announcer and sidekick. Tommy Newsom was frequently the band's substitute director when Severinsen was away from the show or filling in for McMahon. Severinsen continued as bandleader until Carson's retirement in 1992.

He appeared on Jimmy Fallon's Tonight Show in February 2015 when the show traveled to Los Angeles for a week. He played for the evening with the Roots. The appearance helped to promote his nationwide tour.

During the early 1960s, Severinsen began recording big band albums, then moved toward instrumental pop music by the end of the decade. In the 1970s he recorded jazz funk, then disco, finding hits with "Night Journey" and "I Wanna Be With You". He released an album with the jazz fusion group Xebron in 1985. During the next year, he recorded The Tonight Show Band with Doc Severinsen which won the Grammy Award for Best Large Jazz Ensemble Performance. After Carson retired in 1992, he toured with some of the band's members, including Conte Candoli, Snooky Young, Bill Perkins, Ernie Watts, Ross Tompkins, and Ed Shaughnessy.[2]

Severinsen was the principal pops conductor for several American orchestras during and after his time on The Tonight Show. His first was with the Phoenix Symphony in 1983.[10] He held similar positions with the Buffalo Philharmonic Orchestra, Milwaukee Symphony Orchestra, and Minnesota Orchestra.[2]

He retired from conducting in 2007 and was named Pops Conductor Emeritus in Milwaukee[11] and Pops Conductor Laureate in Minnesota.[12] Severinsen was also named Distinguished Visiting Professor of Music and Katherine K. Herberger Heritage Chair for Visiting Artists at Arizona State University School of Music in 2001 and 2002.[13]

In 2014, he was inducted into the Scandinavian-American Hall of Fame.[14]

Severinsen's children are Nancy, Cindy, Allen, Robin Merrill, and Judy Cascio. He has eight grandchildren, including Blaire and Gray Reinhard, who write and perform roots rock music together as the Blaire Reinhard Band. Severinsen has been married three times. Television writer and producer Emily Marshall is his third wife. They met when she was working as a secretary for The Tonight Show producer Fred de Cordova.[15]

This article uses material from the article Doc Severinsen from the free encyclopedia Wikipedia and it is licensed under the GNU Free Documentation License.