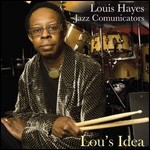 His father played drums and piano and his mother played the piano. He refers to the early influence of hearing jazz, especially hearing big bands on the radio. His main influence was Philly Joe Jones and he was mentored by Jo Jones. His three main associations were with Horace Silver's Quintet (1956–1959), the Cannonball Adderley Quintet (1959–1965), and the Oscar Peterson Trio (1965–1967). Hayes often joined Sam Jones, both with Adderley and Peterson, and in freelance settings.

When he was a teenager, he led a band in Detroit clubs before he was 16. . He worked with Yusef Lateef and Curtis Fuller from 1955 to 1956. He moved to New York in August 1956 to replace Art Taylor in the Horace Silver Quintet and in 1959 joined the Cannonball Adderley Quintet, with which he remained until mid-1965, when he succeeded Ed Thigpen in the Oscar Peterson Trio. He left Peterson in 1967, and formed a series of groups, which he led alone or with others; among his sidemen were Freddie Hubbard, Joe Henderson, Kenny Barron, and James Spaulding. He returned to Peterson in 1971.

The Louis Hayes Sextet, which he formed in 1972, became in 1975 the Louis Hayes-Junior Cook Quintet and the Woody Shaw-Louis Hayes Quintet (Cook remained as a sideman until Rene McLean joined); in its last form the quintet played successful engagements throughout Europe and (without McLean) acted as the host group when, in 1976, Dexter Gordon visited the U.S. for the first time in many years. After Shaw left the group in 1977, Hayes continued to lead it as a hard-bop quintet.

He was with McCoy Tyner's trio for over three years. Since 1989 he has led his own band, and together with Vincent Herring formed the Cannonball Legacy Band.

With The Young Lions

This article uses material from the article Louis Hayes from the free encyclopedia Wikipedia and it is licensed under the GNU Free Documentation License.

(Left A) Pretty Scar Adrian Solo
Update Required To play the media you will need to either update your browser to a recent version or update your Flash plugin.