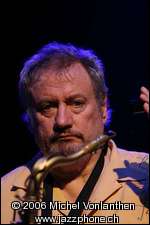 Ronald Edward Cuber (born December 25, 1941) is a jazz saxophonist. He has also played in Latin, pop, rock, and blues sessions. In addition to his primary instrument, baritone sax, he has played tenor sax, soprano sax, clarinet, and flute, the latter on an album by Eddie Palmieri as well as on his own recordings. As a leader, Cuber is known for hard bop and Latin jazz. As a side man, he has played with B. B. King, Paul Simon, and Eric Clapton.[1] Cuber can be heard on Freeze Frame by the J. Geils Band, and one of his most spirited performances is on Dr. Lonnie Smith's 1970 Blue Note album Drives. He was also a member of the Saturday Night Live Band.

He can be heard playing in Frank Zappa's group in the mid-1970s, including the album Zappa in New York. He has been a member of the Mingus Big Band since its inception in the early 1990s. He was an off-screen musician for the movie Across the Universe.

This article uses material from the article Ronnie Cuber from the free encyclopedia Wikipedia and it is licensed under the GNU Free Documentation License.

Mystery Train Bon Jovi
Update Required To play the media you will need to either update your browser to a recent version or update your Flash plugin.