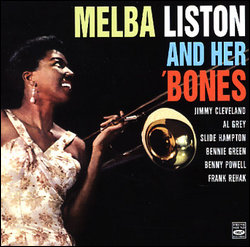 Melba Doretta Liston (January 13, 1926 – April 23, 1999) was an American jazz trombonist, musical arranger, and composer. She was the first woman trombonist to play in big bands during the 1940s and 1960s,[1] and while a skilled instrumentalist Liston was far better known as a writer and arranger.

Liston was born in Kansas City, Missouri. At the age of seven, Melba's mother purchased her a trombone. Her family was very encouraging of her musical pursuits, as they were all music lovers. Melba Liston was primarily self-taught, but "encouraged by her guitar-playing grandfather," who she spent significant time with learning to play spirituals and folk songs.[2] At the age of eight, she was already good enough to be soloing on the local radio station.[3] At the age of ten, she moved to Los Angeles, California. She was classmates with Dexter Gordon, and friends with Eric Dolphy.[2] After playing in youth bands and studying with Alma Hightower and others, she joined the big band led by Gerald Wilson in 1943.[4] She began to work with the emerging major names of the bebop scene in the mid-1940s. She recorded with saxophonist Dexter Gordon in 1947, and joined Dizzy Gillespie's big band (which included saxophonists John Coltrane, Paul Gonsalves, and pianist John Lewis) in New York for a time,[4] when Wilson disbanded his orchestra in 1948. She toured with Count Basie for a time, and then with Billie Holiday (1949) but was so profoundly affected by the indifference of the audiences and the rigors of the road that she gave up playing and turned to education instead. Liston taught for about three years.

She took a clerical job for some years, and supplemented her income by taking work as an extra in Hollywood, including appearances in The Prodigal (1955) and The Ten Commandments (1956). She re-joined Gillespie for tours sponsored by the US State Department in 1956 and 1957, recorded with Art Blakey's Jazz Messengers (1957), and formed her own all-women quintet in 1958. In 1959, she visited Europe with the show Free and Easy, for which Quincy Jones was music director. She accompanied Billy Eckstine with the Quincy Jones Orchestra on At Basin Street East (originally released October 1, 1961, for Verve Records).

In the 1960s she began collaborating with pianist Randy Weston,[5] arranging compositions (primarily his own) for mid-size to large ensembles. This association, especially strong in the 1960s, would be rekindled in the late 1980s and 1990s until her death. In addition, she worked for a variety of leaders including Milt Jackson, Clark Terry, and Johnny Griffin, as well as working as an arranger for various Motown records, even appearing on albums by Ray Charles and others. In 1964, she helped establish the Pittsburgh Jazz Orchestra.[6] In 1971 she was chosen as Musical Arranger for a Stax Records recording artist named Calvin Scott whose album was being produced by Stevie Wonder's first producer Clarence Paul. On this project she worked with Joe Sample and Wilton Felder of the Jazz Crusaders, blues guitarist Arthur Adams, and jazz drummer Paul Humphrey. Due to the financial issues at Stax Records when this album was released in 1972 it did not chart, but Melba's arrangements on the album are some of her finest work. In 1973, however, she once again took a break from her US-based musical projects, moving to Jamaica to teach at the Jamaica School of Music for six years (1973–79), before returning to the USA to lead her own bands.

During her time in Jamaica, she composed and arranged the music for the classic 1975 comedy film Smile Orange[7] (starring Carl Bradshaw, who three years earlier starred in the very first Jamaican film, The Harder They Come). The Smile Orange experience was probably her only known venture into composing reggae music (on which, in this case, she collaborated with playwright Trevor Rhone for the lyrics). The soundtrack of Smile Orange was given a very limited release in Jamaica on the Knuts label.

She was forced to give up playing in 1985 after a stroke left her partially paralyzed,[4] but she continued to arrange music with Randy Weston. In 1987, she was awarded the “Jazz Masters Fellowship” of the National Endowment for the Arts. After suffering from repeated strokes, she died in Los Angeles, California, in 1999, a few days after a major tribute to her and Randy Weston’s music at Harvard University. Her funeral, held at St. Peter’s in Manhattan, featured extensive musical performances by Weston with Jann Parker (performing Liston’s composition “African Lady”), as well as by Chico O’Farrill’s Afro-Cuban ensemble and by Lorenzo Shihab (vocals).

Melba Liston made a reputation as an important jazz arranger, no small achievement in a field generally dominated by men. Her early work with the high-profile bands of Count Basie and Dizzy Gillespie shows a strong command of the big-band and bop idioms. However, perhaps her most important work was written for Randy Weston, with whom she worked for four decades from the early 1960s. The critically acclaimed albums Uhuru Afrika (1960) and Highlife (1963), both of which feature exclusively Weston’s compositions with Liston’s arrangements for large ensemble, are considered jazz masterpieces. Uhuru Afrika, as described in the liner notes by Langston Hughes (who penned lyrics for the second movement), is “a composed composition...and an ordered and arranged composition”; the work, broken into four long movements, demonstrates Liston’s abilities to blend African-oriented rhythms and percussion with jazz horn-playing and orchestration in a large-scale form. In many respects, this album and Highlife, three years later, can be seen as comparable works to those of Miles Davis and Gil Evans of roughly the same period, but oriented toward Africa and African musics instead of the European-influenced harmonies and melodies in the Davis/Evans works. These two Weston-Liston albums also presage the rising awareness of and explicit prominence given to African music in the 1960s, especially as part of the free jazz/”New Thing” movement.

Liston also worked as a "ghost writer" during her career, meaning that she was paid under the table to complete arrangements for other composers, to whom the work would be attributed. This was not an uncommon practice, but considering the gender dynamics of the industry, the lack of acknowledgement of her ghostwriting places her compositions into further obscurity. According to scholars, "Many of the arrangements found in the Gillespie, Jones, and Weston repertoires were accomplished by Liston. In fact, there is much speculation that many of the television and motion-picture theme songs attributed to Quincy Jones during the late 1950s and 1960s were assisted or completed by Liston in her capacity as a ghost writer."[8]

Liston was a woman in a male-dominated profession, and she excelled anyway. Although some consider her an unsung hero,[9] she is very highly regarded in the jazz community. Liston was a trailblazer in her own right, as a trombonist and a woman. Despite this, Liston still articulated difficulties with being a woman on the road. She recalls "There's those natural problems on the road, the female problems, the lodging problems, the laundry, and all those kinda things to try to keep yourself together, problems that somehow or other the guys don't seem to have to go through."[10] She goes on to further recount the struggles she experienced throughout her life, as an African American women, which undoubtedly affected her musical career.[10] In addition to dynamics with fellow musicians, Liston also dealt with larger issues of inequity in the music industry. Scholars note that "It was clear that she had to continually prove her credentials in order to gain suitable employment as a musician, composer, and arranger. She was not paid equitable scale and was often denied access to the larger opportunities as a composer and arranger."[10] Although dealing largely with misogyny and sexism through her career, Liston did have a few favorites with whom she played, one of them being Dizzy Gillespie. From the 1940s through the 1960s, she was the first woman trombonist to work in the leading big bands of Gillespie, Count Basie, Duke Ellington, Quincy Jones, Gerald Wilson, and Clark Terry.[1] Melba Liston appeared as a contestant on the long-running television quiz show What's My Line? in a March 1962 episode. However, Olivia de Havilland was that evening's "mystery guest, but panelist Dorothy Kilgallen excused herself as she knew who Melba Liston was.

Liston's musical style reflects bebop and post-bop sensibilities, not surprising given her stints working with such major bop figures as Dexter Gordon, Dizzy Gillespie, and Art Blakey. Even in her earliest recorded work—such as Gordon’s “Mischievous Lady,” a tribute to her—her solos show an apt blend of motivic and linear improvisation, though they seem to make less use of extended harmonies and alterations. Her well-known solo on Gillespie’s version of Debussy's "My Reverie" shows her strong sense of lyricism, as well.

Her arrangements, especially those with Weston, show a constant flexibility that transcends her musical upbringing in the bebop 1940s, whether working in the styles of swing, post-bop, African musics, or even Motown. Her strong command of rhythmic gestures, grooves, and polyrhythms is particularly notable (again, as illustrated especially in Uhuru Afrika and Highlife). Her instrumental parts demonstrate an active use of harmonic possibilities; although her arrangements suggest relatively subdued interest in the explorations of free jazz ensembles, they certainly use an extended tonal vocabulary, rich with altered harmonic voicings, thick layering, and dissonance. Her work throughout her career has been well received by both critics and audiences alike.

With Herbie Mann and Tamiko Jones

This article uses material from the article Melba Liston from the free encyclopedia Wikipedia and it is licensed under the GNU Free Documentation License.

Cocoon Babes Of Neon
Update Required To play the media you will need to either update your browser to a recent version or update your Flash plugin.