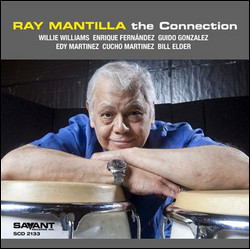 Raymond Mantilla (b. June 22, 1934, in New York City, New York) is an American jazz drummer. He has played as a session musician and toured with some of the most significant jazz musicians of his time. Mantilla has been bandleader of his own ensembles and was a founding member of the percussion ensemble M'Boom, with Max Roach.

Mantilla played in New York from the 1950s, inspired by Afro-Cuban jazz. He played with a number of latin jazz ensembles in the 1950s, including the La Playa Sextet, Xavier Cugat, Lou Perez, René Touzet, Miguelito Valdez, and Monguito Conjunto. He played behind Eartha Kitt in 1955. In 1960 he toured with Herbie Mann and recorded with Max Roach. He recorded with Al Cohn in 1961, and recorded with Freddie Hubbard, Buddy Rich, and Larry Coryell in the 1960s. From 1963 to 1969 Mantilla led his own band in Puerto Rico, and in 1970 joined forces with Max Roach's percussion ensemble, M'Boom.

In 1979 he founded his own ensemble, the Ray Mantilla Space Station, and through the 1980s toured or recorded with Muhal Richard Abrams, Kenny Burrell, Shirley Scott, and Warren Chiasson. In 1991 he put together a new ensemble, the Jazz Tribe.

This article uses material from the article Ray Mantilla from the free encyclopedia Wikipedia and it is licensed under the GNU Free Documentation License.

Over My Shoulder Dust
Update Required To play the media you will need to either update your browser to a recent version or update your Flash plugin.