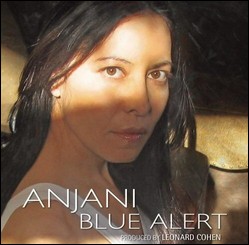 Anjani Thomas (born July 10, 1959) is an American singer-songwriter and pianist, best known for her work with singer-songwriter Leonard Cohen, as well as Carl Anderson, Frank Gambale, and Stanley Clarke. She became a solo artist in 2000.

Anjani was born in Honolulu, Hawaii where she trained in guitar, piano and voice. She attended Berklee College of Music for a year then moved to New York City to a pursue a music career. She performed in jazz clubs before meeting producer John Lissauer, who hired her to provide backup vocals on Leonard Cohen's influential song "Hallelujah" from Various Positions. Anjani went on to tour with Cohen in 1985, as his keyboardist and backup vocalist, and has regularly worked with Cohen ever since, lending her talents to I'm Your Man, The Future, and Dear Heather.[1]

Anjani launched a solo career with Anjani in 2000 followed by The Sacred Names in 2001 – an ode to the Aramaic, Greek and Hebrew names of God. In 2006, Cohen contributed lyrics and production talents to Anjani's music and arrangements for Blue Alert on Columbia Records. The song "Blue Alert" was used in a 2007 Old Navy TV spot.[2]

In 2011, Anjani began working on a follow up to Blue Alert, which continues the collaboration with Leonard Cohen on eight new songs. The new record, tentatively scheduled for release in early 2012, is being produced by Jerry Marotta.[3][4]

This article uses material from the article Anjani from the free encyclopedia Wikipedia and it is licensed under the GNU Free Documentation License.

Backtrack Rebecca Ferguson
Update Required To play the media you will need to either update your browser to a recent version or update your Flash plugin.