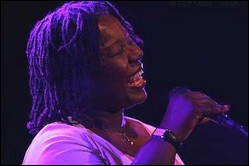 Veronica "Randy" Crawford (born February 18, 1952, Macon, Georgia)[1] is an American jazz and R&B singer. She has been more successful in Europe than in the United States, where she has not entered the Billboard Hot 100 as a solo artist.[1] She has had multiple top five hits in the UK, including her 1980 number 2 hit, "One Day I'll Fly Away". Despite her American nationality, she won Best British Female Solo Artist in recognition of her popularity in the UK at the 1982 Brit Awards.[2]

Crawford first performed at club gigs from Cincinnati to Saint-Tropez, but made her name in mid 1970s in New York, where she sang with jazzmen George Benson and Cannonball Adderley.[3] She signed with Columbia Records and released her first single, "Knock On Wood" / "If You Say the Word" in 1972.[4][5] Adderley invited her to sing on his album, Big Man: The Legend Of John Henry (1975).[6] During a brief tenure at Columbia Records, Crawford recorded "Don't Get Caught in Love's Triangle".[6] She is also one of the vocalists on "Fred Wesley & The Horny Horns – A Blow For Me, A Toot To You" LP from 1977.

In 1978, Crawford sang vocals on "Hoping Love Will Last", the opening song on side two of Please Don't Touch, which was the second solo album by former Genesis guitarist Steve Hackett.[7]

She led R&B veterans the Crusaders on the transatlantic hit "Street Life" (1979).[3][8] A specially re-recorded version was featured in the soundtrack for the films Sharky's Machine and Jackie Brown,[6] and appeared in commercials in the early 2000s. She later recorded for Warner Bros. Records. Crawford was named the 'Most Outstanding Performer' at the 1980 Tokyo Music Festival.[6] Randy also recorded the love theme ("People Alone") for the film soundtrack of The Competition on MCA Records in 1980.

Her follow-up solo efforts included "One Day I'll Fly Away" (1980) and "You Might Need Somebody" (1981), which became soul standards, and a cover of the Tony Joe White penned, first popularised by Brook Benton, "Rainy Night in Georgia". The album, Secret Combination (1981) stayed on the UK Albums Chart for sixty weeks, after which her profile dipped, despite a return to the UK Top Ten with "Almaz" in 1986.[3] She continued to record for Warner Bros through the 1990s, but was unable to score either a big R&B hit or major crossover success.[6]

Naked And True (1995) brought Crawford back to her roots: it included George Benson's "Give Me the Night", and confirmed her soul heritage by featuring Funkadelicists Bootsy Collins, Bernie Worrell and the Fred Wesley Horns.[3] She enjoyed her highest profile of the decade when rising starlet Shola Ama had a worldwide hit with her 1997 cover of "You Might Need Somebody".[3]

Crawford recorded a live session with Joe Sample on July 24, 2007, at Abbey Road Studios for Live from Abbey Road. The episode she shared with David Gilmour and Amos Lee was screened on the Sundance Channel in the US and Channel 4 in the UK.

This article uses material from the article Randy Crawford from the free encyclopedia Wikipedia and it is licensed under the GNU Free Documentation License.

I venti del cuore Fiorella Mannoia
Update Required To play the media you will need to either update your browser to a recent version or update your Flash plugin.