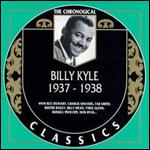 Kyle was born in Philadelphia, Pennsylvania. He began playing the piano in school and by the early 1930s worked with Lucky Millinder, Tiny Bradshaw and later the Mills Blue Rhythm Band. In 1938, he joined John Kirby's sextet, but was drafted in 1942. After the war, he worked with Kirby's band briefly and also worked with Sy Oliver. He then spent thirteen years as a member of Louis Armstrong's All-Stars, and performed in the 1956 musical High Society. He is perhaps best known as an accompanist.

A fluent pianist with a light touch, Kyle never achieved much fame, but he always worked steadily. He died in Youngstown, Ohio.

Kyle had few opportunities to record as a leader and none during his Armstrong years; just some octet and septet sides in 1937, two songs with a quartet in 1939, and outings in 1946 with a trio and an octet, 17 songs in all.

He is credited as the co-author of the song "Billy's Bounce" recorded by the Modern Jazz Quartet in 1992 with Bobby McFerrin on the album MJQ and Friends.

This article uses material from the article Billy Kyle from the free encyclopedia Wikipedia and it is licensed under the GNU Free Documentation License.

Follow You Imagine Dragons
Update Required To play the media you will need to either update your browser to a recent version or update your Flash plugin.