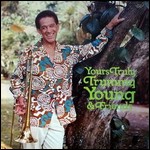 James "Trummy" Young (January 12, 1912 – September 10, 1984) was an American trombonist in the swing era. He established himself as a star during his 12 years playing opposite Louis Armstrong in Armstrong's All Stars. He had one hit with his version of "Margie", which he played and sang with Jimmie Lunceford's orchestra in 1937.[1] During his years with Armstrong, Young changed his entire trombone style in order to more closely fit the Armstrong approach to jazz music. This effort led to his becoming an outstanding and unique master of traditional jazz, belying his previous efforts in the Bop field.

Young grew up in Savannah, Georgia, and Richmond, Virginia; he was originally a trumpeter, but by his professional debut in 1928 he had switched to trombone. From 1933 to 1937 he was a member of Earl Hines' orchestra; he then joined Jimmie Lunceford's orchestra in which he played from 1937 to 1943, scoring a hit on Decca Records with "Margie" which featured his vocal. With Sy Oliver he co-wrote "'Tain't What You Do (It's the Way That You Do It)", a hit for both Lunceford and Ella Fitzgerald in 1939. It has since been recorded by many other artists and was a hit song in the UK for Fun Boy Three with Bananarama in 1982. His other compositions include "Easy Does It" and "Trav'lin' Light"[2] (the latter co-written with Jimmy Mundy, with lyrics by Johnny Mercer).

Young joined Benny Goodman in 1945 and soloed on several hit records, including the #2 hit "Gotta Be This or That". He also played with Charlie Parker and Dizzy Gillespie on a Clyde Hart-led session in 1945, and with Jazz at the Philharmonic. In September 1952 he joined the Louis Armstrong All-Stars and stayed twelve years (he performed in the 1956 musical High Society). Trummy Young was a good foil for Armstrong (most memorably on their 1954 recording of "St. Louis Blues"). In 1964 Young quit the road in order to settle in Hawaii, occasionally emerging for jazz parties and special appearances.

According to his own life story, printed in the July 22, 1977 issue of the Awake! magazine published by Jehovah's Witnesses, he became one of Jehovah's Witnesses in 1964. He was married to Sally Tokashiki with whom he had two daughters, Andrea (who is a jazz singer) and Barbara.[3]

He died after a cerebral hemorrhage at the age of 72.[1]

This article uses material from the article Trummy Young from the free encyclopedia Wikipedia and it is licensed under the GNU Free Documentation License.

Strange Weather Glenn Frey
Update Required To play the media you will need to either update your browser to a recent version or update your Flash plugin.