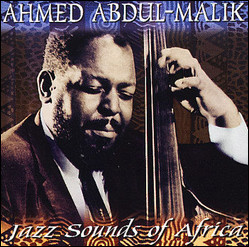 Abdul-Malik is remembered for integrating Middle Eastern and North African music styles in his jazz music.[3] He was a bass player for Art Blakey, Earl Hines, Randy Weston, and Thelonious Monk, among others.[4]

Abdul-Malik claimed that his father was from Sudan and moved to the United States. Research by historian Robin Kelley, however, indicates that Abdul-Malik was born to Caribbean immigrants and changed his birth name:

Ahmed Abdul-Malik was born Jonathan Tim Jr., (sometimes spelled "Timm") on January 30, 1927, to Matilda and Jonathan Tim Sr. – both of whom had immigrated from St. Vincent in the British West Indies three years earlier. They also had a daughter, Caroline, born a little more than a year after Jonathan Jr. Jonathan Tim Sr.'s death certificate not only confirms his birth in St. Vincent, it indicates that his father – Abdul-Malik's grandfather – James Tim, and his mother, Mary Daniels, were both from the Caribbean. City directories for Brooklyn, as well as the American Federation of Musicians Union Local 802 directory, confirm the bassist's birth name as Jonathan Tim Jr.[1]:92

The family lived at 545 Hopkinson Avenue, but moved to 1984 Atlantic Avenue before their son began school.[1]:93 Jonathan, Jr. had violin lessons from his father, who was a plasterer and general laborer.[1]:93 Aged seven, Jonathan, Jr. attended the Vardi School of Music and Art, "to continue his violin training, and over time took up piano, cello, bass, and tuba."[1]:93 His parents divorced in the late 1930s, and he lived with his father and new wife, at 2117 Dean Street, but his father died on February 9, 1941, from a bleeding gastric ulcer.[1]:93 Jonathan, Jr. continued studying, including having lessons with local bassist Franklin Skeete,[1]:93 before joining The High School of Music & Art in Harlem.[5] There, "his skills on violin and viola earned him a spot in the All-City Orchestra."[1]:93

Abdul-Malik was most active as a jazz musician from the mid-1950s to the mid-1960s. He recorded half a dozen albums as leader, which have been described as containing a "refreshing" fusion of jazz with Arabic and African music.[3] During this time he was also described as "a hard bop bassist of some distinction".[3]

In the mid-1970s, Abdul-Malik was a substitute teacher at Junior High School 281, in Bensonhurst, Brooklyn, New York, as well as the strings instructor at Junior High School 117 in the Brooklyn neighborhood of Bedford-Stuyvesant, teaching strings under the supervision of Andrew Liotta. While seeking a teaching certification, in addition to study under Liotta in orchestration and composition, Abdul-Malik also taught Sudanese in the junior high school language department. In the late 1970s he taught individual students private instruction in jazz improvisation at New York University. In the late 1980s he taught orchestra at Seth Low Junior High (I.S. 96) in Bensonhurst, Brooklyn.

As an oud player he did a tour of South America for the United States Department of State and performed at an African jazz festival in Morocco.[3]

This article uses material from the article Ahmed Abdul-Malik from the free encyclopedia Wikipedia and it is licensed under the GNU Free Documentation License.