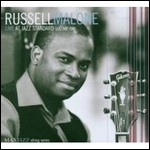 Russell Malone (born November 8, 1963) is an American jazz guitarist. He began working with Jimmy Smith in 1988 and went on to work with Harry Connick, Jr. and Diana Krall throughout the 1990s.[1]

Malone was born in Albany, Georgia, United States. He began playing at the age of four with a toy guitar his mother bought him. He was influenced by B.B. King and The Dixie Hummingbirds.[2] A significant experience was when he was twelve and saw George Benson perform on television with Benny Goodman. He is mostly self-taught.[3][4]

Starting in 1988, he spent two years with Jimmy Smith, then three with Harry Connick Jr. In 1995, he became the guitarist for the Diana Krall Trio,[3] participating in three Grammy-nominated albums, including When I Look in Your Eyes, which won the award for Best Vocal Jazz Performance. Malone was part of pianist Benny Green's recordings in the late 1990s and 2000: Kaleidoscope (1997), These Are Soulful Days (1999), and Naturally (2000). The two formed a duo and released the live album Jazz at The Bistro in 2003 and the studio album Bluebird in 2004. They toured until 2007.

Malone has toured with Ron Carter, Roy Hargrove, and Dianne Reeves and has done session work with Kenny Barron, Branford Marsalis, Wynton Marsalis, Jack McDuff, Mulgrew Miller, and Eddie "Cleanhead" Vinson. He recorded his first solo album in 1992 and has led his own trio and quartet.[3] Other guest appearances have included Malone with vibraphonist Bobby Hutcherson, organist Dr. Lonnie Smith, and pianist Hank Jones in celebration of his 90th birthday. In October 2008 he performed in a duo with guitarist Bill Frisell at Yoshi's in Oakland, California. During the next year, Malone became a member of the band for saxophonist Sonny Rollins, celebrating his 80th birthday in New York City.

Malone recorded live on September 9–11, 2005, at Jazz Standard, New York City, and Maxjazz documented the performances on the albums Live at Jazz Standard, Volume One (2006) and Live at Jazz Standard, Volume Two (2007). Appearing on these two volumes, and touring as The Russell Malone Quartet, were Martin Bejerano on piano, Tassili Bond on bass, and Johnathan Blake on drums. Malone's 2010 recording Triple Play (also on Maxjazz) featured David Wong on bass and Montez Coleman on drums. His album, All About Melody featured pianist Rick Germanson, bassist Luke Sellick, and drummer Willie Jones III.[5][6]

As sideman or guest

This article uses material from the article Russell Malone from the free encyclopedia Wikipedia and it is licensed under the GNU Free Documentation License.

True Blue Madonna
Update Required To play the media you will need to either update your browser to a recent version or update your Flash plugin.