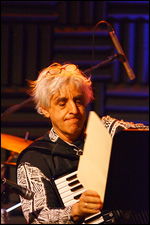 Gil Goldstein (born 1950) is American jazz pianist and synthesizer player who started on the accordion.

He began studying accordion at age 5, but later moved on to cello and piano. He studied at the Berklee College of Music and by 1973 was working with Pat Martino, Lee Konitz, and others. He started with the Gil Evans Orchestra in the early 1980s and also worked with Wayne Shorter. He has also worked in films including De-Lovely, where he performed "I Love Paris" and coached Kevin Kline, and in Little Buddha as an arranger.

He resumed doing occasional accordion work in the 1980s. The most notable of his accordion efforts in the 1980s might be when accompanying Michel Petrucciani and on his own. As an accordionist he toured with Richard Galliano in 2000, but also played piano on the tour.

Goldstein has also composed music for films including the 1994 film Radio Inside.[1] 1999's Simply Irresistible called for rousing big-band ballroom music which goes from source music to programmatic during the climactic dance scenes.

He has won three Grammy Awards two of which came from his production and arrangement credits for Michael Brecker's Wide Angles.

In 2007 he co-released an album Your Songs: The Music of Elton John on ObliqSound with legends Steve Swallow, Paul Motian, and well known Italian saxophonist Pietro Tonolo. The quartet performed jazz arrangements of some of Elton John's most popular songs.

Goldstein is currently a professor at New York University.

This article uses material from the article Gil Goldstein from the free encyclopedia Wikipedia and it is licensed under the GNU Free Documentation License.