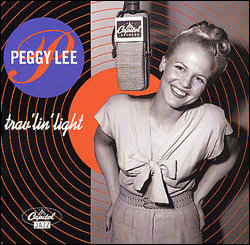 Norma Deloris Engstrom[1] (sometimes also spelled Egstrom; May 26, 1920 – January 21, 2002) known professionally as Peggy Lee, was an American jazz and popular music singer, songwriter, composer, and actress, in a career spanning six decades. From her beginning as a vocalist on local radio to singing with Benny Goodman's big band, she forged a sophisticated persona, evolving into a multi-faceted artist and performer. During her career, she wrote music for films, acted, and recorded conceptual record albums that combined poetry and music.

Lee was born Norma Deloris Engstrom in Jamestown, North Dakota, the seventh of eight children to parents Marvin Olof Engstrom, a station agent for the Midland Continental Railroad, and his wife, Selma Amelia (née Anderson) Engstrom, on May 26, 1920. She and her family were Lutherans.[2] Her father was Swedish-American and her mother was Norwegian-American.[3] After her mother died when Lee was four,[4] her father married Min Schaumber.[5]

Lee first sang professionally over KOVC radio in Valley City, North Dakota.[6] She later had her own series on a radio show sponsored by a local restaurant that paid her a salary in food. Both during and after her high school years, Lee sang for small sums on local radio stations. Radio personality Ken Kennedy, of WDAY in Fargo, North Dakota (the most widely heard station in North Dakota), changed her name from Norma to Peggy Lee.[7] Lee left home and traveled to Los Angeles at the age of 17.

She returned to North Dakota for a tonsillectomy and was noticed by hotel owner Frank Bering while working at the Doll House in Palm Springs, California.[8] It was here that she developed her trademark sultry purr – having decided to compete with the noisy crowd with subtlety rather than volume. Beringin offered her a gig at The Buttery Room, a nightclub in the Ambassador Hotel East in Chicago. There, she was noticed by bandleader Benny Goodman. According to Lee, "Benny's then-fiancée, Lady Alice Duckworth, came into The Buttery, and she was very impressed. So the next evening she brought Benny in, because they were looking for a replacement for Helen Forrest. And although I didn't know, I was it. He was looking at me strangely, I thought, but it was just his preoccupied way of looking. I thought that he didn't like me at first, but it just was that he was preoccupied with what he was hearing." She joined his band in 1941 and stayed for two years.[9][10]

In 1942 Lee had her first No. 1 hit, "Somebody Else Is Taking My Place",[11] followed by 1943's "Why Don't You Do Right?" (originally sung by Lil Green), which sold over a million copies and made her famous. She sang with Goodman's orchestra in two 1943 films, Stage Door Canteen and The Powers Girl.

In March 1943 Lee married Dave Barbour, a guitarist in Goodman's band.[6] Lee said, "David joined Benny's band and there was a ruling that no one should fraternize with the girl singer. But I fell in love with David the first time I heard him play, and so I married him. Benny then fired David, so I quit, too. Benny and I made up, although David didn't play with him anymore. Benny stuck to his rule. I think that's not too bad a rule, but you can't help falling in love with somebody."

...when she left the band that spring [1943], her intention was to quit the footlights altogether and become Mrs. Barbour, fulltime housewife. It's to Mr. Barbour's credit that he refused to let his wife's singing and composing talent lay dormant for too long. "I fell in love with David Barbour," she recalled. "But 'Why Don't You Do Right' was such a giant hit that I kept getting offers and kept turning them down. And at that time it was a lot of money. But it really didn't matter to me at all. I was very happy. All I wanted was to have a family and cling to the children [daughter Nicki]. Well, they kept talking to me and finally David joined them and said 'You really have too much talent to stay at home and someday you might regret it.'"[12]

So she drifted back to songwriting and occasional recording sessions for the fledgling Capitol Records in 1947, for whom she produced a long string of hits, many of them with lyrics and music by Lee and Barbour, including "I Don't Know Enough About You" (1946) and "It's a Good Day" (1947). With the release of the US No. 1-selling record of 1948, "Mañana", her "retirement" was over. In 1948, Lee's work was part of Capitol's library of electrical transcriptions for radio stations. An ad for Capitol Transcriptions in a trade magazine noted that the transcriptions included "special voice introductions by Peggy."[13]

In 1948 Lee joined Perry Como and Jo Stafford as a rotating host of the NBC Radio musical program The Chesterfield Supper Club.[14][15] She was also a regular on NBC's Jimmy Durante Show and appeared frequently on Bing Crosby's radio shows in the late 1940s and early 1950s.

She left Capitol for Decca Records in 1952 but returned to Capitol in 1957.[16] She is most famous for her 1958 cover version of Little Willie John's "Fever", written by Eddie Cooley and John Davenport,[17] to which she added her own, uncopyrighted lyrics ("Romeo loved Juliet," "Captain Smith and Pocahontas"), and her 1969 rendition of Leiber and Stoller's "Is That All There Is?" Her relationship with the Capitol label spanned almost three decades, aside from her brief but artistically rich detour (1952–1956) at Decca Records, where in 1953 she recorded one of her most acclaimed albums, Black Coffee. While recording for Decca, Lee had hit singles with the songs "Lover" and "Mister Wonderful". She recorded the song "Lover" with Decca Records, because Capitol already had success of the song with Les Paul.[18]

In her 60-year-long career, Lee was the recipient of three Grammy Awards (including the Lifetime Achievement Award), an Academy Award nomination, The American Society of Composers, Authors and Publishers (ASCAP) Award, the President's Award, the Ella Award for Lifetime Achievement, and the Living Legacy Award[19] from the Women's International Center. In 1999 Lee was inducted into the Songwriters Hall of Fame.[20]

She wrote the lyrics for the following songs:

Her first published song was in 1941, "Little Fool". "What More Can a Woman Do?" was recorded by Sarah Vaughan with Dizzy Gillespie and Charlie Parker. "Mañana (Is Soon Enough for Me)" was number 1 on the Billboard singles chart for nine weeks in 1948, from the week of March 13 to May 8.

Lee was a mainstay of Capitol Records when rock and roll came onto the American music scene. She was among the first of the "old guard" to recognize this new genre, as seen by her recording music from The Beatles, Randy Newman, Carole King, James Taylor and other up-and-coming songwriters. From 1957 until her final disc for the company in 1972, she produced a steady stream of two or three albums per year which usually included standards (often arranged quite differently from the original), her own compositions, and material from young artists.

Lee played an alcoholic blues singer in Pete Kelly's Blues (1955), for which she was nominated for the Academy Award for Best Supporting Actress.[22]

Lee did the speaking and singing voices for several characters in Disney's Lady and the Tramp (1955): she played the human "Darling" (in the first part of the movie), the dog "Peg", and the two Siamese cats "Si and Am".[21]

Lee was married four times; each marriage ended in divorce:

Lee continued to perform into the 1990s, sometimes confined to a wheelchair.[25][26] After suffering years of poor health, Lee died of complications from diabetes and a heart attack on January 21, 2002, at the age of 81.[27] She was cremated and her ashes were buried in a bench-style monument in The Garden of Serenity of the Westwood Village Memorial Park Cemetery in Los Angeles' Westwood, Los Angeles, California neighborhood.[28][29] On her marker in a garden setting is inscribed, "Music is my life's breath."

Lee was nominated for 12 Grammy Awards, winning Best Contemporary Vocal Performance for her 1969 hit "Is That All There Is?" In 1995 she was given the Grammy Lifetime Achievement Award.

In 2003, "There'll Be Another Spring: A Tribute to Miss Peggy Lee" was held at Carnegie Hall.[30] Produced by recording artist Richard Barone, the sold-out event included performances by Cy Coleman, Debbie Harry, Nancy Sinatra, Rita Moreno, Marian McPartland, Chris Connor, Petula Clark, and others. In 2004 Barone brought the event to a sold-out Hollywood Bowl,[31] and then to Chicago's Ravinia Festival, with expanded casts including Maureen McGovern, Jack Jones and Bea Arthur. The Carnegie Hall concert was broadcast on NPR's "Jazz Set".

This article uses material from the article Peggy Lee from the free encyclopedia Wikipedia and it is licensed under the GNU Free Documentation License.

Fox On The Run Sweet
Update Required To play the media you will need to either update your browser to a recent version or update your Flash plugin.