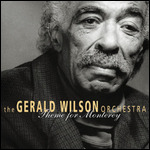 Wilson was born in Shelby, Mississippi,[1] and at the age of 16 moved to Detroit, where he graduated from Cass Technical High School (one of his classmates was saxophonist Wardell Gray).[3] He joined the Jimmie Lunceford orchestra in 1939, replacing its trumpeter and arranger, Sy Oliver. While with Lunceford, Wilson contributed numbers to the band's book, including "Hi Spook" and "Yard-dog Mazurka", the first influenced by Ellington's recording of "Caravan" and the latter an influence on Stan Kenton's "Intermission Riff".[4]

During World War II, Wilson also performed for a brief time with the U.S. Navy, with musicians including Clark Terry, Willie Smith and Jimmy Nottingham, among others. Around 2005, many of the members of the band reunited as "The Great Lakes Experience Big Band," with Wilson conducting and Ernie Andrews making a guest appearance at the invitation of Clark Terry. Wilson also played and arranged for the bands of Benny Carter, Duke Ellington, Count Basie and Dizzy Gillespie.

Wilson's wife of more than 50 years, Josefina Villasenor Wilson, is Mexican-American, and a number of his compositions showed his love of Spanish/Mexican themes, especially "Viva Tirado", which later became a hit for the rock band El Chicano. Along with his wife, Wilson had three daughters (Jeri, Lillian (Teri) and Nancy Jo), his son Anthony (who is guitarist for Diana Krall), and a number of grandchildren, all of whom have songs composed for them - his compositions were often inspired by his family members.[1]

The National Endowment for the Arts named Wilson an NEA Jazz Master in 1990. In 1998 Wilson received a commission from the Monterey Jazz Festival for an original composition, resulting in "Theme for Monterey", which was performed at that year's festival. In later years, he formed orchestras on the West and East coasts, each with local outstanding musicians. He also made special appearances as guest conductor, including with the Carnegie Hall Jazz Band (now the Jon Faddis Jazz Orchestra of New York), the Lincoln Center Jazz Orchestra, the Chicago Jazz Ensemble and European radio jazz orchestras, conducting the BBC Big Band in 2005.[3] He hosted an innovative show, in the 1970s, on KBCA in Los Angeles, which was co-hosted by Dennis Smith, where he played " . . . music of the past, the present, and the future."

In February 2006, Wynton Marsalis and the Lincoln Center Jazz Orchestra performed his music with Gerald Wilson conducting. He had a unique style of conducting: "Garbed in well tailored suits, his long white hair flowing, Wilson shaped the music with dynamic movements and the elegant grace of a modern dancer." Asked about his style of conducting by Terry Gross on the NPR show Fresh Air in 2006, he replied, 'It's different from any style you've ever seen before. I move. I choreograph the music as I conduct. You see, I point it out, everything you're to listen to.'"[1]

In June 2007, Wilson returned to the studio with producer Al Pryor and an all-star big band to record a special album of compositions commissioned and premiered at the Monterey Jazz Festival for the festival's 50th anniversary. Wilson had helped lead celebrations of the festival's 20th and 40th anniversary with his specially commissioned works (1998's Grammy-nominated album Theme for Monterey). The album Monterey Moods was released on Mack Avenue Records in September 2007. In September 2009, Wilson conducted his eight-movement suite "Detroit", commissioned by the Detroit Jazz Festival to mark its 30th anniversary. The work includes a movement entitled "Cass Tech" in honor of his high school alma mater. In 2011, his last recording was the Grammy nominated "Legacy"

Wilson died at his home in Los Angeles, California, on September 8, 2014,[2] after a brief illness that followed a bout of pneumonia, which had hospitalized him. He was 96 years old.

This article uses material from the article Gerald Wilson from the free encyclopedia Wikipedia and it is licensed under the GNU Free Documentation License.

Piccola nazione Francesco Pervangher
Update Required To play the media you will need to either update your browser to a recent version or update your Flash plugin.