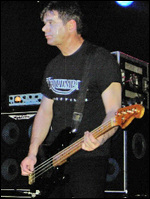 Jean-Jacques "JJ" Burnel[1] (born 21 February 1952, London) is a Franco-English musician, producer and songwriter, best known as the bass guitarist with the British rock band the Stranglers.

Jean-Jacques Burnel was born in Notting Hill, London, to French parents. He moved with his parents to Godalming, Surrey, when he was 12 years old and attended the Royal Grammar School, Guildford, subsequently reading history at the University of Bradford and Huddersfield Polytechnic.[2] Burnel originally trained as a classical guitarist, but adopted the bass guitar as his instrument within The Stranglers.[3] He has provided lead vocals on nearly a third of the band's songs.

Burnel has been a member of the Stranglers since the group's inception in 1974, but has also made two solo albums: Euroman Cometh in 1979, and Un Jour Parfait in 1988, as well as a collaborative album with fellow Stranglers member Dave Greenfield, Fire and Water (Ecoutez Vos Murs) in 1983.[4] Burnel has also produced and appeared as a guest musician for a number of artists, such as Lizard and ARB from Japan, Polyphonic Size (from Belgium) and Taxi Girl's album, Seppuku, in 1981, as well as Laurent Sinclair's "Devant le Miroir" maxi single. Burnel also formed a rhythm and blues covers band, the Purple Helmets, who played a number of concerts and released two albums in the late 1980s.

As a French citizen, Burnel received his call-up papers for national service in France. He succeeded in avoiding it with a novel defence, arguing that his absence would indirectly damage the Stranglers as a band, and therefore the careers of the other members. This was in accordance with Burnel's claim that only the "bourgeois" would ever agree to serve their country's military.

Burnel composed and performed music for the anime, Gankutsuou: The Count of Monte Cristo, including both the opening and ending themes, "We Were Lovers", and "You Won't See Me Coming" respectively.

Burnel is fluent in French and writes many of his songs in the language.

Burnel is noted for his distinctive bass guitar sound and melodic bass lines. These are particularly prominent on earlier Stranglers recordings produced by Martin Rushent, such as the hit singles "No More Heroes" and "Peaches".

In the early days, Burnel's distinctive aggressive sound was created using a Fender Precision Bass with RotoSound roundwound strings played with a plectrum very close to the bridge, through Hiwatt all-valve amplification.[5] However, the defining factor was the use of a Marshall 4x12 speaker cabinet in which the speaker cones were ripped, creating a distorted sound.[6]

He was one of the first bass guitarists to use Trace Elliot amplification when the company began production in 1980. He now uses amplification by Ashdown Engineering who have honoured him with his own JJ500 signature amps.[8]

Burnel is currently a 7th degree black belt (nanadan) in Shidokan Karate[9] and is head of Shidokan UK.[10] He is also a motorcyclist and has owned many Triumph motorbikes.[11]

This article uses material from the article Jean-Jacques Burnel from the free encyclopedia Wikipedia and it is licensed under the GNU Free Documentation License.

It's Your Love Tim McGraw feat. Faith Hill
Update Required To play the media you will need to either update your browser to a recent version or update your Flash plugin.