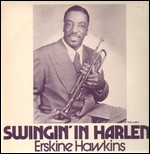 Erskine Ramsay Hawkins (July 26, 1914 – November 11, 1993)[1] was an American trumpeter and big band leader from Birmingham, Alabama, dubbed "The 20th Century Gabriel".[2] He is most remembered for composing the jazz standard "Tuxedo Junction" (1939) with saxophonist and arranger Bill Johnson. The song became a popular hit during World War II, rising to No. 7 nationally (version by the Erskine Hawkins Orchestra) and to No. 1 nationally (version by the Glenn Miller Orchestra). Vocalists who were featured with Erskine's orchestra include Ida James, Delores Brown, and Della Reese. Hawkins was named after Alabama industrialist Erskine Ramsay.

Erskine Hawkins was named by his parents after Alabama industrialist Erskine Ramsay who was rewarding parents with savings accounts for them for doing so. Hawkins attended Councill Elementary School and Industrial High School (now known as Parker High School) in Birmingham, Alabama. At Industrial High School, he played in the band directed by Fess Whatley, a teacher who trained numerous African-American musicians, many of whom populated the bands of famed band leaders such as Duke Ellington, Lucky Millinder, Louis Armstrong and Skitch Henderson (of the NBC Orchestra.)

In the late 1930s Hawkins and his Orchestra were one of the house bands at the Savoy Ballroom. They alternated with the Chick Webb band, and often used Tuxedo Junction as their sign-off song before the next band would take the stage, so that the dancing would continue uninterrupted. Hawkins also engaged in "battles of the bands" with such bandleaders as Glenn Miller, Duke Ellington, and Lionel Hampton.[3]

In the mid 1940s, he was transferred to the main RCA Victor label, recording many of his greatest hits for both labels during this decade. He remained with them until 1950 when he switched over to Coral Records. He continued to record for many years.

Hawkins was trumpeter and band leader in the lobby bar and show nightclub at The Concord Resort Hotel in Kiamesha Lake, New York from 1967 to 1993 with his last performing group Joe Vitale piano, Dudly Watson bass, Sonny Rossi vocals & clarinet, and George Leary drums . Hawkins died at his home in Willingboro Township, New Jersey in November 1993, after a brief visit with his sister in Alabama before he was able to return to resume playing with his band at the Concord at the age of 79.[1] He is buried in Elmwood Cemetery, alongside his sister, in Birmingham, Alabama.

Flo Hawkins, who appeared in the film That Man of Mine, was his wife. They eventually became estranged and she worked in the Catskills.[4]

Induction into the Alabama Jazz Hall of Fame

On his final Sunday night radio show (July 26, 2009) Malcolm Laycock celebrated the 95th anniversary of Hawkins' birth, by featuring music performed by Hawkins. In 2011, the story of Erskine Hawkins and the Bama State Collegians was the subject of a Florida State University Film School MFA Thesis Film "The Collegians", written and directed by Bryan Lewis.[5][6]

This article uses material from the article Erskine Hawkins from the free encyclopedia Wikipedia and it is licensed under the GNU Free Documentation License.

Hurts So Good Adrian Sieber
Update Required To play the media you will need to either update your browser to a recent version or update your Flash plugin.