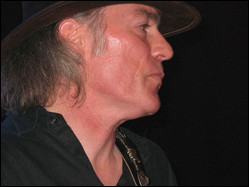 born on 27/1/1957 in Leverkusen, Nordrhein-Westfalen, Germany

Klaus Major Heuser (born 27 January 1957 in Leverkusen) is a German musician and producer. He found fame as the lead guitarist of the Cologne rock band BAP.

His musical influences are the Rolling Stones, especially Keith Richards, as well as Eric Clapton and Dutch band Golden Earring.

Heuser gained major popularity as the guitarist of rock band BAP, of which he was a member from 1980 to 1999. He was mainly responsible for BAP's musical style and wrote music to the hit songs like Verdamp lang her (literally: 'A damn long time ago'), Frau ich freu mich (literally: 'Woman, I'm looking forward to') and Alles em Lot (literally: 'Everything is ok').

On 17 February 2006 he released Major & Suzan, a collborative album, which was recorded with Berlin singer Susanne Werth.

His latest work is Men in Blues with veteran German blues guitarist Richard Bargel. The album will be released in Germany, Austria and Switzerland on 3 February 2012.

He got his nickname Major from Major Healey from the TV series I Dream of Jeannie.

This article uses material from the article Klaus Heuser from the free encyclopedia Wikipedia and it is licensed under the GNU Free Documentation License.

Follow The Wind Bastian Baker
Update Required To play the media you will need to either update your browser to a recent version or update your Flash plugin.