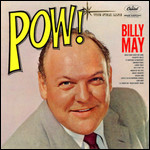 As a trumpet player, during the 1940s big band May recorded such songs as "Measure for Measure", "Long Tall Mama", and "Boom Shot", with Glenn Miller and His Orchestra,[1] and "The Wrong Idea", "Lumby", and "Wings Over Manhattan" with Charlie Barnet and His Orchestra.[1] With his own band, May had a hit single, "Charmaine", in 1952, and he released an album, Sorta-May.

May was born in Pittsburgh, Pennsylvania. He started out playing the tuba in the high school band. "I sat in the rear of the stand. [...] I didn't realize it at the time, but I was intrigued with becoming an arranger and an orchestrator."[2] At the age of seventeen May began playing with Gene Olsen's Polish-American Orchestra.[3] After playing for a few local bands, May heard Charlie Barnet's band on the radio in his hometown of Pittsburgh. May approached the bandleader and asked if he could write arrangements for the band. This happened in the summer of 1938. From 1938 to 1940, May wrote arrangements and played trumpet for Charlie Barnet's big band. His arrangement of the Ray Noble composition "Cherokee" became a major hit of the swing music era. During the Barnet days, May revealed a significant flair for satire on a composition titled "The Wrong Idea", composed with Charlie Barnet, that ridiculed the bland "Mickey Mouse" style of safe big-band music with specific musical mockery of bandleader Sammy Kaye, known for his "swing and sway" trademark. May's caustic lyrics to the song called it "swing and sweat with Charlie Barnet". Bandleader Glenn Miller hired May away from Charlie Barnet in 1940. "May points out that he was not responsible for any of the [Glenn Miller] band's signature hits, but he did write the beautiful left-field introduction to [Bill] Finegan's [arrangement of] 'Serenade In Blue'."[4]

May worked as an arranger for the bands of Glenn Miller and Les Brown before being hired as staff arranger first for the NBC radio network, then for Capitol Records.

At Capitol, May wrote arrangements for many top artists. These included Frank Sinatra on the albums Come Fly with Me (1958), Come Dance with Me! (1959) and Come Swing with Me! (1961); Nat King Cole on the albums Just One of Those Things and Let's Face the Music!, as well as numerous singles (all his work with Cole being packaged later on the 2-CD set The Billy May Sessions); Stan Freberg, with whom he was a longtime collaborator, featuring on many of the artist's comedy recordings; Peggy Lee on the album Pretty Eyes; Sue Raney on her second album Songs for a Raney Day; Vic Damone on the albums The Lively Ones and Strange Enchantment; Jeri Southern on the album Jeri Southern Meets Cole Porter; Keely Smith on the album Politely and on a duet single, "Nothing In Common"/"How Are Ya Fixed For Love?", with Sinatra; Bobby Darin on the album Oh! Look at Me Now; Nancy Wilson on the albums Like In Love, Something Wonderful, Tender Loving Care, Nancy - Naturally! and various tracks from the albums Just For Now and Lush Life; Matt Monro on several tracks from the albums Invitation to the Movies, Invitation to Broadway, and These Years; Bing Crosby and Rosemary Clooney on the albums That Travelin' Two-Beat and Fancy Meeting You Here; and Sir George Shearing on the albums Satin Affair and Burnished Brass, co-arranged with Shearing (May also conducted Shearing's album Concerto for My Love, on which Shearing had sole credit for the arrangements).

Additionally, May's orchestra was featured on many Capitol Records children's projects, including cowboy star, Hopalong Cassidy. He also worked closely with early 1950s satirist Stan Freberg, using his arranging skills to help Freberg create his spoofs of current hits by creating musical backing often stunningly close to the original hit single. On Freberg's Wun'erful, Wun'erful! a lacerating spoof of bandleader Lawrence Welk, May hired some of the best jazz musicians in Hollywood for his recording sessions, and they relished the idea of mocking the financially successful Welk sound, which they considered musically awful. The result was a note-perfect recreation of Welk's sound as Freberg and a group of vocalists created parodies of Welk's "musical family". Freberg has recounted that Welk was less than amused by the results, which he could not have achieved without May.

May also composed and conducted the music for Freberg's short-lived comedy radio series on CBS, which ran for fifteen episodes in 1957. His send-up of trashy horror-film music ("Gray Flannel Hat Full of Teenage Werewolves") is notable.

In 1959, May won the Grammy Award for Best Performance by an Orchestra.

Much of May's work for Capitol has been reissued on the Ultra-Lounge series of CDs.

With other record labels

The Crosby-Clooney collaboration was a sequel to their earlier album on RCA Records, Fancy Meeting You Here, also arranged by May.

May's other non-Capitol work included another Bing Crosby duet album, this time with Louis Armstrong, entitled Bing & Satchmo; a further duet album twinning Bobby Darin with Johnny Mercer, called Two of a Kind; the sixth in Ella Fitzgerald's acclaimed series of Song Books for Verve Records, Ella Fitzgerald Sings the Harold Arlen Songbook; similar dips into Cole Porter and Rodgers and Hart with Anita O'Day, entitled Anita O'Day Swings Cole Porter with Billy May and Anita O'Day and Billy May Swing Rodgers and Hart (both on Verve); Mel Tormé's Latin-flavoured album ¡Olé Tormé!: Mel Tormé Goes South of the Border with Billy May; Movie Star Jane Russell's self-titled album on MGM Records in 1958; early albums by Jack Jones (Shall We Dance?) and Petula Clark (In Hollywood); one solitary session with Sarah Vaughan for Roulette Records in 1960, to record the single "The Green Leaves of Summer" and three other tracks; May also arranged and recorded one album in Cleveland with Cosmic Records titled Guess Who[5] for artist Jerry Lee (Jerry Principe) at the Golden Key Club and two more albums with Keely Smith, recorded nearly forty years apart – CheroKeely Swings from 1962 and Keely Sings Sinatra, one of May's last pieces of work, from 2001.

After Sinatra left Capitol to start his own label, Reprise Records, May continued to provide arrangements for him, off and on, for nearly thirty more years, working on the albums Sinatra Swings, Francis A. & Edward K. (with Duke Ellington) and Trilogy 1: The Past, as well as the chart for one of Sinatra's last ever solo recordings, "Cry Me a River" (1988). In addition, May was the natural choice to arrange Sinatra's knockabout duet with Sammy Davis Jr., "Me and My Shadow", which was a hit single on both sides of the Atlantic in 1962, whilst he also contributed to Sinatra's ambitious "Reprise Musical Repertory Theatre" project, providing a few arrangements for three of its four albums, South Pacific, Kiss Me, Kate and Guys and Dolls, May's charts being variously performed by Sinatra, Davis, Crosby, Dean Martin, Jo Stafford and Lou Monte and yielding a perennial Sinatra concert favourite, "Luck Be a Lady" from Guys and Dolls.

In 1958, May arranged a Christmas album on Warner Bros. Records featuring the Jimmy Joyce Singers, titled A Christmas to Remember.

In 1983, May arranged the song "He Came Here For Me" for the Carpenters' An Old-Fashioned Christmas album on A&M Records.

May's charts often featured brisk tempos and intricate brass parts. One distinctive feature of his style is his frequent use of trumpet mute devices; another, a saxophone glissando, is widely known as his "slurping saxes". However, May was also an accomplished writer in slower tempos, sometimes using string arrangements. Good examples of this aspect of his work include his brass chart for "These Foolish Things (Remind Me of You)" on the Cole album Just One of Those Things, his string arrangement of "April in Paris" on Sinatra's Come Fly With Me album, and his arrangement of "I Can't Get Started" on Keely Smith's Politely, which includes a nod to May in the lyrics ("Billy May arranged this for me").[6]

In 1957, May made his debut as film composer with Jane Russell's The Fuzzy Pink Nightgown and the soundtrack was released on Imperial Records. His film scores include the Rat Pack film Sergeants 3 (1962), Johnny Cool (1963), Tony Rome (1967), The Secret Life of an American Wife (1968) and The Ballad of Andy Crocker (1969).

May also arranged and produced the song "River of No Return" for Tennessee Ernie Ford for the 1954 film of the same name starring Marilyn Monroe and Robert Mitchum. Billy May and His Orchestra is also credited as playing themselves in the film Nightmare (1956), starring Edward G. Robinson, and May as music and vocal arranger of music by Herschel Burke Gilbert, who was also musical director.

Billy May's compositions included "Long Tall Mama" and "Measure for Measure", recorded with the Glenn Miller Orchestra, "Boom Shot", written with Glenn Miller (Billy's wife Arletta originally received credit as co-author in his place) for the soundtrack of the 1942 movie Orchestra Wives, "Harlem Chapel Bells", which was performed with Glenn Miller and his Orchestra on April 2, 1941 and broadcast on the Chesterfield Moonlight Serenade radio program , "Lean Baby", "Fat Man Boogie", "Ping Pong", "Jooms Jones", "Gabby Goose", "Lumby", "Daisy Mae" and "Friday Afternoon" with Hal McIntyre, "Miles Behind", "The Wrong Idea" with Charlie Barnet, "Wings Over Manhattan", "Filet of Soul", "Mayhem", "Gin and Tonic", and "Solving the Riddle". But his biggest hit as a composer was the children's song "I Tawt I Taw a Puddy Tat", which he recorded with Mel Blanc in 1950.[7] Another arrangement, "Be My Host", served as the winner's fanfare on The Newlywed Game and was played after host Bob Eubanks announced who the winning couple was.

This article uses material from the article Billy May from the free encyclopedia Wikipedia and it is licensed under the GNU Free Documentation License.

Together (The Country Collaboration) For King & Country feat. Hannah Ellis & Jackson Michelson
Update Required To play the media you will need to either update your browser to a recent version or update your Flash plugin.