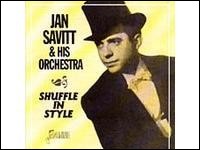 Savitt was born in Shumsk, then part of the Russian Empire (now part of Ukraine) and reared in Philadelphia. He evidenced musical ability an early age and began winning conservatory scholarships in the study of the violin. He was offered the position of concert master in Leopold Stokowski's Philadelphia Symphony Orchestra, but turned it down, preferring to continue his studies at Curtis Institute. About a year later, believing himself ready, he joined Stokowski and the association continued for seven years, during which time Savitt gained further laurels as a concert soloist and leader of a string quartet.

His band The Top Hatters was formed in 1937 and began touring the following year. Their songs include "720 in the Books", "It's A Wonderful World" and his theme songs "Quaker City Jazz" and "From Out Of Space". Savitt was one of the first of the big band leaders to feature an African American vocalist, George Tunnell ("Bon Bon"). His other vocalists were Carlotta Dale, Allan DeWitt, Joe Martin, and Gloria DeHaven. His band names include Jan Savitt & His Top Hatters, the Jan Savitt String Orchestra and Jan Savitt & His Orchestra.

He got his start in popular music some time later as music director of KYW, Philadelphia, where he evolved the unique "shuffle rhythm" which remained his trademark. Numerous sustaining programs created such a demand for the "shuffle rhythm" that Savitt left KYW to form his own dance crew.

Savitt recorded short pieces for the National Broadcasting System's Thesaurus series, probably in the 1940s. These were pieces radio stations used as 'fillers' just prior to network programs, which would begin precisely on the hour or half-hour. Disc 1143 in the Thesaurus catalogue features four selections by the Jan Savitt Orchestra on one side of the 33 1/3 transcription: "The Masquarade is Over I'm Afraid"; "If I Didn't Care"; "Ring Dem Bells", and "Romance Runs in the Family".

Shortly before arriving in Sacramento, California, with his orchestra on Saturday, October 2, 1948, for a concert scheduled for that evening at Memorial Auditorium, Savitt was stricken with a cerebral hemorrhage and taken to Sacramento County Hospital. Savitt died on October 4, with his wife at his bedside.[2]

This article uses material from the article Jan Savitt from the free encyclopedia Wikipedia and it is licensed under the GNU Free Documentation License.

Give Me All Night Carly Simon
Update Required To play the media you will need to either update your browser to a recent version or update your Flash plugin.